In Pictures: Horse trams move home – with an interloper

We may still wait the start of horse tram service in Douglas but it is getting closer with the transport of the first of the operational horse trams to their temporary home for 2019. 29, 42 and 45 were all moved to the marquee on 21st May with further trams expected to follow in the next few days. But probably the most remarkable tram to be moved on to the Douglas Bay Horse Tramway was Manx Electric Railway 34! We know that when they announced they were laying the tracks to a higher standard there was the suggestion the MER could run further into Douglas but no-one expected it this quick!

Of course, its not quite like that as 34 is a diesel powered works tram and it was being used to help clear the new tracks ahead of the start of testing and horse training before public services can be used. In operating on the horse tramway it now means 34 has run – in different guises – on four different lines on the Isle of Man: Snaefell Mountain Railway, Isle of Man Steam Railway and, of course, the Manx Electric Railway. It has also become the first tram to run on the newly laid tracks and is the first none Douglas Bay Horse Tramway vehicle to run along the horse tramway since the restored Upper Douglas Cable Tramway vehicle 72/73.

Meanwhile, work on the Prom redevelopment will be suspended during the TT fortnight and to this end a section of the roadway has received plain tarmac ahead of the laying of tracks once the Isle of Man gets back to normal following the hectic TT period. It is still expected horse trams will run for a short 500 metres during this period. 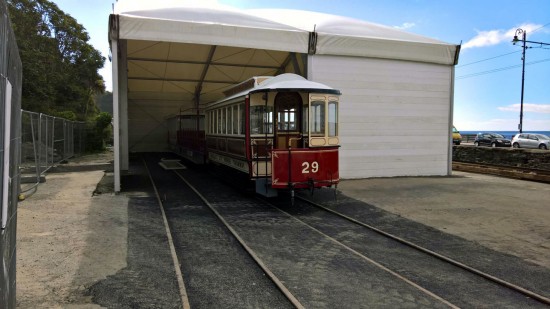 Our first look at the new marquee with 29 at the front with 42 immediately behind and then 45 at the back. Tracks have only been laid in one half of the marquee at this point and it seems two trams can be fitted on each road with 29 coming out the front in this view. 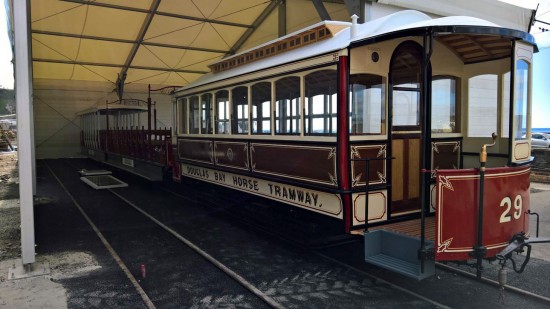 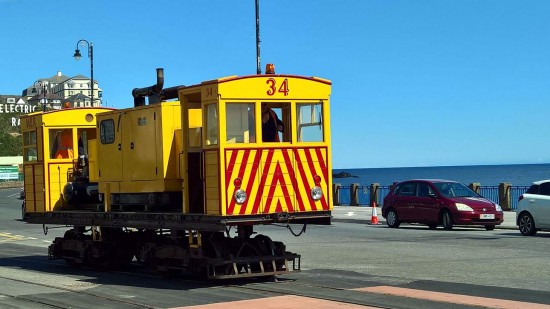 The very unusual sight of a MER vehicle on the Douglas Bay Horse Tramway! 34 just outside Derby Castle. 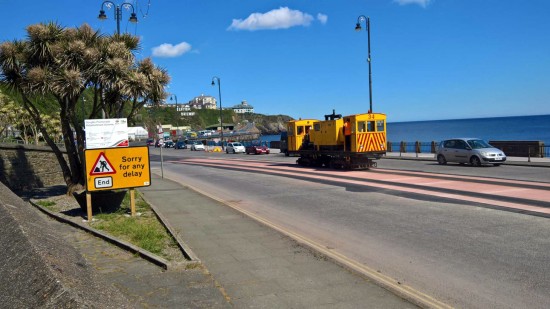 There is no doubt that 34 is indeed on the Horse Tramway! 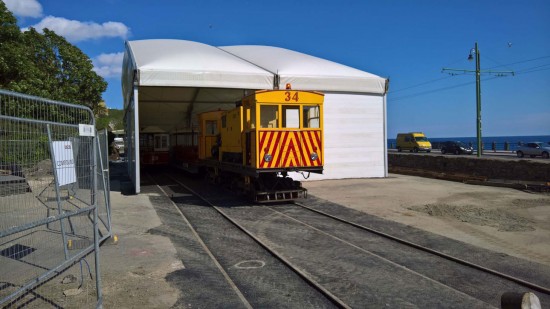 34 stabled in front of the new horse tram marquee storage depot. (All Photographs by Mike Poole, 21st May 2019)