We stay in Fleetwood for this week’s Blackpool Tramway archive image but this time we head back in time a bit further to the 1980s for a view of Centenary Car 641.

This photo was taken in 1987 and shows the original Centenary Car, 641, just rounding the curve in Albert Square into North Albert Street with a service which will terminate at Fleetwood Ferry (Bold Street). At this time 641 had been in service for three years and 1987 was to be the year that it was to be joined by five more class members with that year being the main year they carried fare paying passengers for the first time. In the early stages of its operating career 641 was easily identifiable by its roof advert box which at this time featured adverts for Pricebusters (in later years a full all over advert for the same business would follow).

Today 641 can be found on display alongside Pleasure Beach loop. Owned by the Fleetwood Heritage Leisure Trust it is currently in a purple based livery featuring artwork. 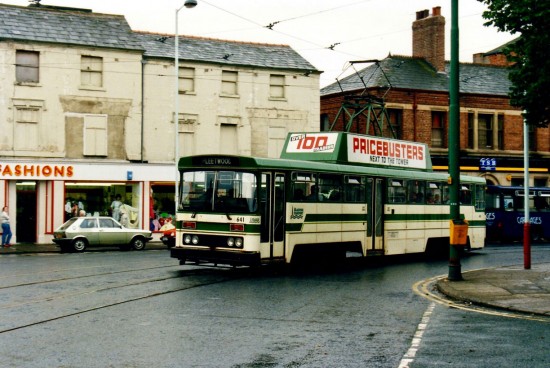