Posted on Sunday 22 September 2019 by Gareth Prior

Across the UK there are a number of small transport museums run by volunteers with limited opening hours which tend to go under the radar somewhat but still have many key exhibits which have been saved for the future. One such museum is the Aston Manor Road Transport Museum which amongst several buses has the lower deck of Birmingham Corporation Tramways 107 on display.

107 is said to be on the museum’s restoration wish list but it would take a lot of work and there are currently question marks over the future of the museum and whether it will be able to remain open beyond this summer. If the worst does happen and the museum does close it is unclear what would happen to the remains of this tram, one of only two Birmingham Corporation trams still believed to be in existence. 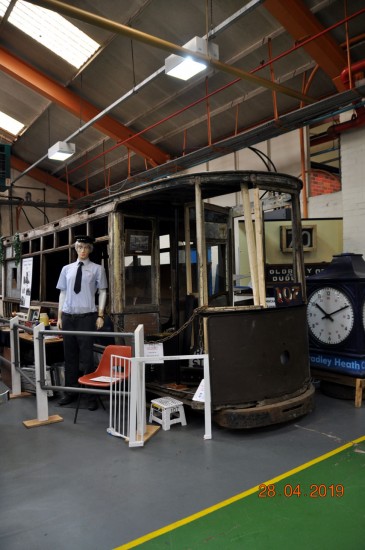 With the obligatory dummy dressed as a conductor alongside this is 107 at the museum showing the current state of the vehicle. (Photograph by Ken Jones, 28th April 2019)