In Pictures: Worksite cleared in Talbot Square – but more snagging works to come

It’s a case of good and bad news for the Blackpool North Railway Station extension of the Blackpool Tramway. Firstly, the major worksite at Talbot Square has now been cleared of all equipment showing off the new layout here in full for the first time but then on the flip side Blackpool Council have announced that there will be some further temporary road closures to come to allow for remedial work to take place along Talbot Road.

The Council have confirmed exactly when these closures may occur except to say in the near future and that they would all take place within a single weeks period. It is reported in the Blackpool Gazette that all the work will be completed at the cost of the contractor although no details of exactly what the problem is hasn’t been said. Another closure will also take place for five days from 12th May to allow for quality and safety checks to take place.

Of course, this won’t be it for the short extension either as the overhead wires will need to be installed at some point in the future and then there is still the small matter of Wilkinson’s which needs to be relocated to the Houndshill Shopping Centre before the old building is demolished and replaced by a new terminus for the trams. Just when this may be is still unknown with the Council not having come out publicly to give a date. 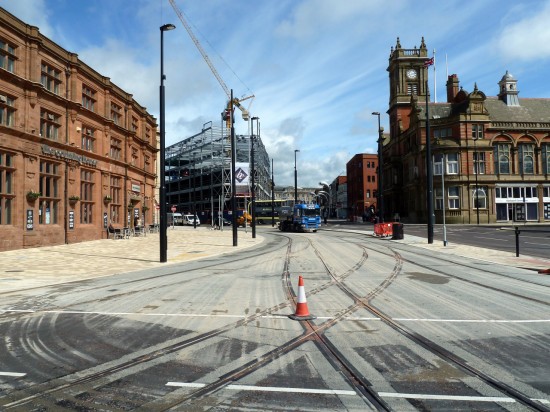 In this photo we see an uninterrupted view of Talbot Square with its all new tram tracks in place. (Photograph by Peter Dockerty, 2nd May 2019)