Lancastrian Transport Trust – a look back at 2012

2012 has been a very challenging year for the Lancastrian Transport Trust, and its prized collection of historic Blackpool trams. At the start of the year, nine of the LTT’s trams were housed at Rigby Road depot, but due to the deteriorating relationship between the Trust and Blackpool Transport, the entire collection had been removed before the year end. Happily, some of these trams have had a very succesful 12 months, whilst others have seen their fortunes take a turn for the worse.

It was suspected for some time that the relationship between BTS and the LTT had been turning frosty, and this situation escalated during 2012, a year which saw the LTT support Classic Bus North West in operating a promendade bus service in direct competition with BTS. The Trust used the rent fees charged by the company for the continued storage of its trams to justify its involvement, but it cannot be doubted that this must have placed further pressure on an already strained relationship. It was therefore not a complete surprise when Blackpool Transport demanded that the LTT remove all of its vehicles from the Rigby Road site, stating that this was due at least in part to the lack of visible progress on the plans to develop a visitor attraction in which to house them at Thornton Gate. This had been made more difficult as the site in question remains occupied by the contractors employed in tramway upgrade works.

Before this development, three of the Trust’s trams had already departed. Open Boat 605 headed to Beamish on loan, where it has been repainted as 233 and returned to service, sponsored by British Trams Online. There it joined fellow LTT car Balloon 703, alias Sunderland 101, which enjoyed extensive use throughout the year.  Standard 143 also left on April 20th, when it headed back to the Trust’s Brinwell Street premises. This car had been at Rigby Road since August 2010, but its incomplete condition had prevented it from playing a meaninful role in the tramway’s 125th anniversary events the following month. With BTS reluctant to complete its restoration, 143 was returned to Brinwell Road for this work to continue, although as yet it has remained untouched. Of note, BTS agreed to donate its refurbished bogies to the LTT as compensation for not carrying out any further work on it, which will greatly assist with its completion at some time in the future.

A further high profile departure was that of the illuminated Rocket 732, which headed to the illuminations depot in July for a cosmetic restoration, which led to its external lights being fully illuminated for the first time since 1999. The tram was later placed on static display at Gynn Square for the duration of the illuminations, and at the time of writing it remains in situ having often been fully lit up for the Christmas period.

These moves left six LTT trams at Rigby Road, all of which were removed between 4th and 7th September. These being OMO 8, Permanent Way car 259, Coronation 304, Brush Railcoach 632, and Balloons 704 and 715. 304 has since moved to Beamish where it proved extremely popular during a brief stint of operation, but disapointingly the others remained in outside storage for the remainder of the year due to a mix-up with the haulage firm used to move the trams.

Other LTT trams not already mentioned include English Electric Railcoach 279, which continued to receive some work during the year as its transformation from a flat-fronted towing car to a streamlined Railcoach continues. Some superb detail work has been undertaken by a small team of dedictaed volunteers, which will hopefully ensure that a superbly restored 279 will run on a heritage tramway before too long. In a surprise move, the Trust also acquired another former Railcoach in 2012 – Towing car 671. This tram had originally been sold to Merseytravel and moved to Knowsley at the end of 2011, but a swap deal saw it join the LTT fleet, with the intention being to restore it with flat ends as a contrast to 279. The tram duly returned to Blackpool in 2012, and is now stored in a bus yard near to OMO 8 and friends. In return, Trailer 687 and Brush Railcoach 637 were both moved to Knowsley and are now owned by Merseytravel. Finally, both Brush car 622 and Coronation 663 remained safely stored at Brinwell Road throughout 2012.

Towards the end of the year, the LTT announced that it had commissioned an independent review of its activities, with a view towards thinning-down its collection to ensure that its limited resources are focussed on ensuring that its most valuable vehicles will be preserved for the enjoyment of future generations. So far this has seen several vintage buses sold off to good new homes, but it remains to be seen whether any of their trams will follow in 2013. This may not neccessarily be a bad thing, as with support seemingly in decline it would seem prudent to focus the available resources on the several unique trams and buses in their care.

Finally, the comments section on this news blog has recently seen some heated discussion about the LTT’s current predicament. Whatever individuals may think of the organisation though, it is important to remember one key point: that the LTT exisits primarily to preserve Blackpool trams (and buses), for enthusiasts to enjoy in the future. Without support, both in terms of financial and volunteer input, it becomes increasingly difficult for the charity to achieve its admirable goals, and so it is to be hoped that their fortunes will improve this year – if only for the benefit of the trams which they own. 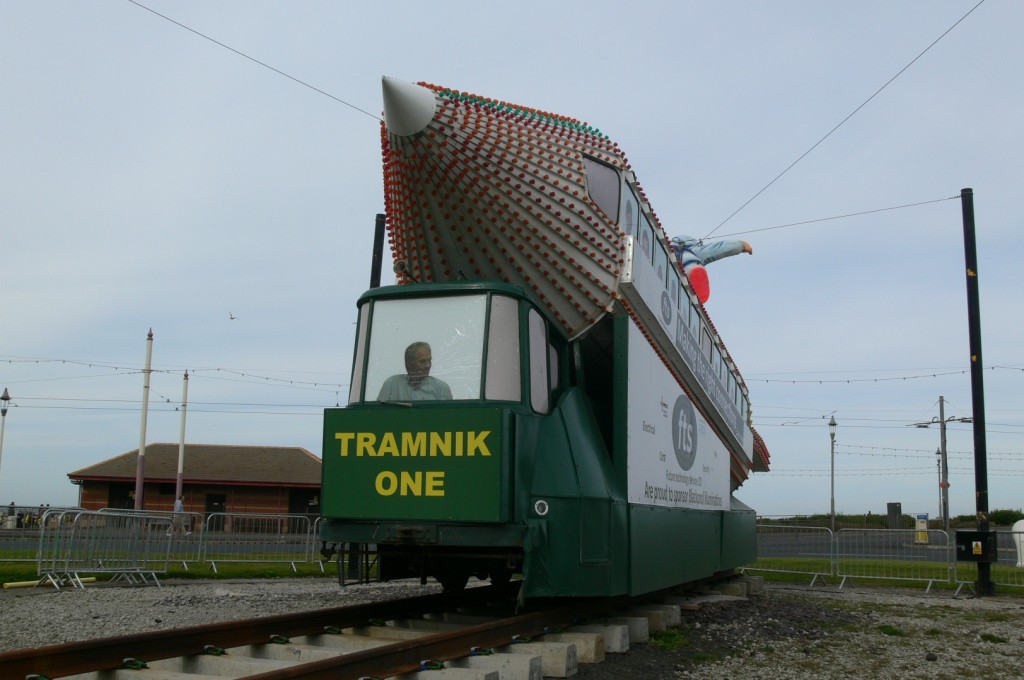 Despite the many challenges the LTT faced in 2012, the Rocket 732 had a great year, back in the limelight at the Gynn roundabout for the annual illuminations. Here it is seen in daylight shortly after arrival at its temporary new home. (Photo by Andrew Waddington)

2 Responses to Lancastrian Transport Trust – a look back at 2012