Posted on Thursday 14 February 2019 by Gareth Prior

Today we conclude our images from November 1962 in Glasgow with one of the last runs of a tram on the city’s tramways.

As part of Martin Miller’s visit – which it may be remembered was actually to assess 1005 for preservation – the party managed to persuade the staff at Coplawhill Works to allow some of the trams being prepared for scrapping to be taken for a short “spin” (it was a very different time as you can’t imagine that happening in 2019!) The ground conditions were poor and the access point from Albert Drive into Barrland Street remained firmly set towards Albert Street. But was lucky as this meant that the workers agreed to a tram running the length of Albert Street before entering the works.

This photo shows an unidentified Coronation out on the tramway during these runs on 19th November 1962. 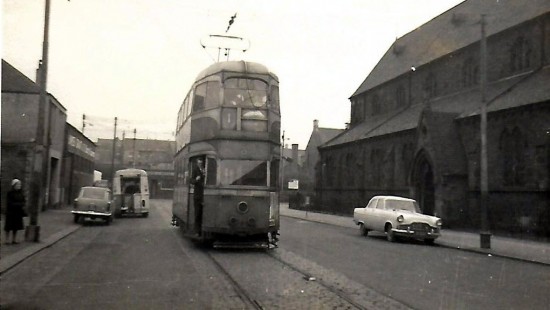