Posted on Thursday 24 January 2019 by Gareth Prior

A very popular tram – part of the static collection at Crich nowadays of course – with enthusiasts is Leeds 602 and that is the tram which features in today’s look into the photographic archives.

Easily identifiable by its regal Purple livery – although that effect is rather lost in this black and white photo – 602 was constructed in 1953 as one of two single deck prototypes. It was fitted with VAMBAC equipment – as also fitted to Blackpool’s Coronation Cars of a similar vintage – along the addition of other modern equipment but the tram didn’t prove to be a success in its home city. As a non-standard tram it didn’t even last until the end of the tramway with withdrawal coming in 1957. It was acquired for the Tramway Museum Society arriving at Crich in 1960 and since then has seen sporadic periods of operation with its most recent spell ending in 2006. The decision has since been taken not to restore the tram to operational condition with it instead being conserved as is.

The exact date of this photo is not known but it could either be during 1972 or in the period between 1975 and 1976. Crich Stand provides the backdrop for 602 as it heads south towards Stephenson Place with “Special Car” as the destination. 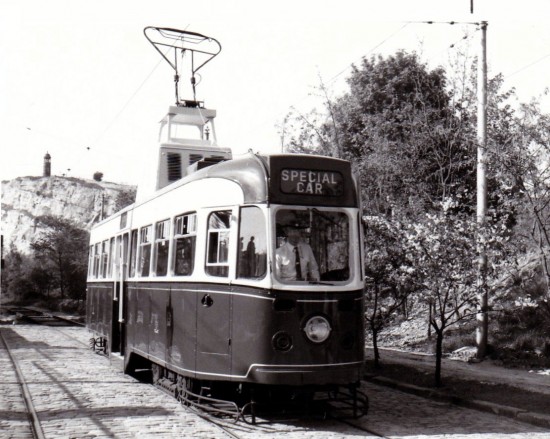 1 Response to Picture in Time: Leeds 602