Posted on Tuesday 22 January 2019 by Gareth Prior

We stay in Fleetwood for this week’s offering from the Blackpool Tramway archives as we have another photo of a tram which we can’t quite identify!

What we do know is that in this photo we are looking at one of the iconic Blackpool Balloon trams which is heading back to Pleasure Beach as it heads through the streets of Fleetwood which at the time of this photo was the only place you could see trams on a British street. The fleet number – which is in gold on the green section just below the drivers window – can’t quite be made out but does possibly end in a 2. The Balloon is in the standard green and cream livery and is running with a trolley.

Also in this photo are plenty of period vehicles including a National North Western bus – registration number SJA 366J – which probably dates this photo to the early 1970s. 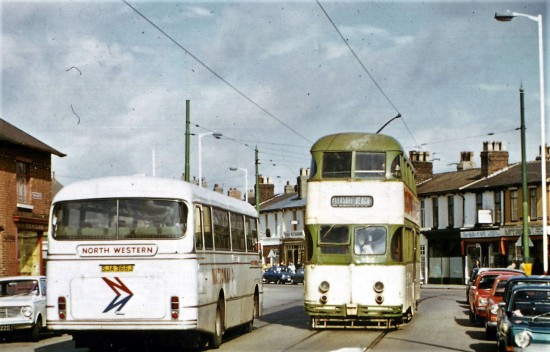