Posted on Tuesday 30 October 2018 by Gareth Prior

Today our archive photo series is back in Blackpool once again for a late 1970s view of the last of the open top Balloon Cars – no. 712.

Of course when the tram was delivered to Blackpool – entering service in April 1935, becoming the last of the Balloon Cars to carry passengers for the first time – it was numbered 249 with its now familiar number not following until the 1968 renumbering. It may have been the last to enter service but it became the first of the open toppers to be enclosed when it received the alterations in the August of 1941 – a mere six (and a bit) years after it had entered service. The tram remained in service until the end of the 2009 season when it was withdrawn and donated to the Tramway Museum Society. It departed Rigby Road for the last time on the back of a low loader in March 2010 – following a repaint into original colours and renumbering to 249 – and was immediately put into the Great Exhibition Hall as part of a redisplay of this area at the Crich Tramway Village. And that is where it remains to this day with the lower deck open for inspection by visitors although the “Top Deck Closed” signs are up to prevent access to the upper deck.

In this view we see 712 – complete with gold fleet numbers just below the drivers windscreen – in the 1970s version of the Green and Cream fleet livery. The tram is on New South Promenade and is on a service all the way through to Fleetwood. It is also being followed closely by another Balloon Car which will only travel as far as Cabin. 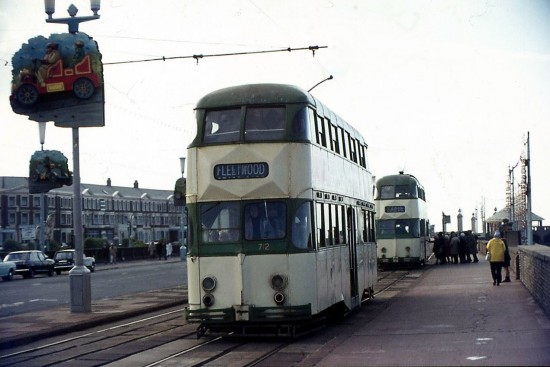