Around the World in Trams: San Francisco 1006

Posted on Saturday 27 October 2018 by Gareth Prior

Continuing our world tour today as we head over the Atlantic to the far side on the United States of America and San Francisco.

Usually when we feature San Francisco on these pages we are looking at one of the two Blackpool Boat Cars which run on the heritage streetcar service but today we are more at home with a standard US streetcar – a San Francisco PCC. This is car 1006 which was delivered to San Francisco in 1948 as one of 10 cars known by Muni as Torpedoes because of their shape (later also called Big Tens). All of these PCCs were built double ended but by the mid-1950s the doors on one side had been sealed with the cars then operating as single enders. 1006 remained in service right up until the end of normal operation of the PCCs in San Francisco in 1982 before being converted back to double end operation to operate at the Trolley Festivals of the mid-1980s.

1006 is now restored in original livery – having received this style again in time for the Muni centenary in 2012 – and is seen at Pier 15 on the San Francisco waterfront on 24th August 2016. 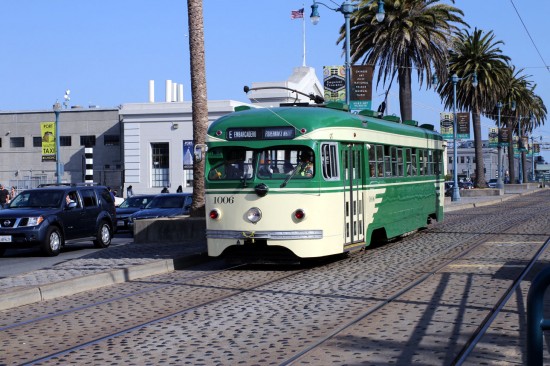