In the second in our series of Visitor’s Guides, Edward M Koehler takes a look at the Great Orme Tramway in Llandudno, North Wales. Once again Edward gives his observations of the best places to get photos of this unique line following a visit on 31st July 2011.

First things first, while it is located along the side of a road and in a road it is a ‘tramway’ in that sense, but the Great Orme Tramway is actually two funicular railways that meet end on.  The trolley poles still sported by the car were actually part of a telephone system linking the car driver with the operator at the hoist house and did not carry traction current, although remaining in place today they are no longer used for that purpose.

Parking can be a little tough in Llandudno; I recommend that you drive to the top of the Great Orme where a parking lot serving the hilltop park is available to the public.  This was the option I chose when I visited the line on Sunday afternoon 31st July 2011.  I purchased a round trip ticket and made my way to the Victoria base station changing cars at Halfway.  Once at Victoria I began photographing the line in earnest.  This station is located at the intersection of Church Walks and Old Road. 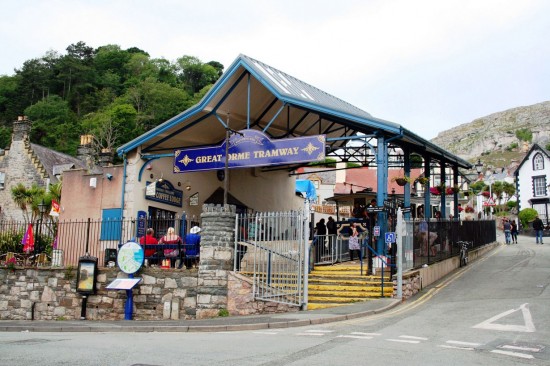 The Victoria terminus of the Great Orme Tramway where many will start their trip up to the summit. 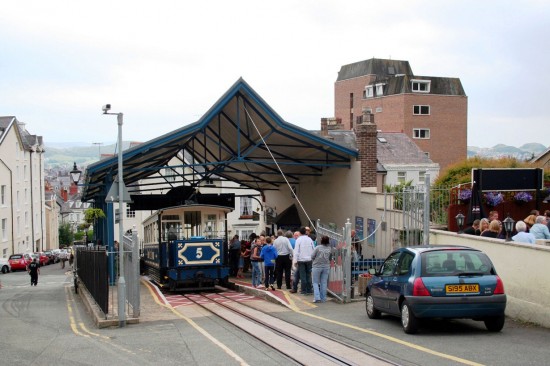 A view of Victoria station from the other side shows 5 waiting to depart.

The cars departing up the hill enter a narrow section of Old Road.  One of the two images that I wished I had captured would have been a car coming out of the narrow road section and crossing the open area to reach Victoria station.  By the way, out of season Victoria station serves as a storage location for one of the GOT’s cars. 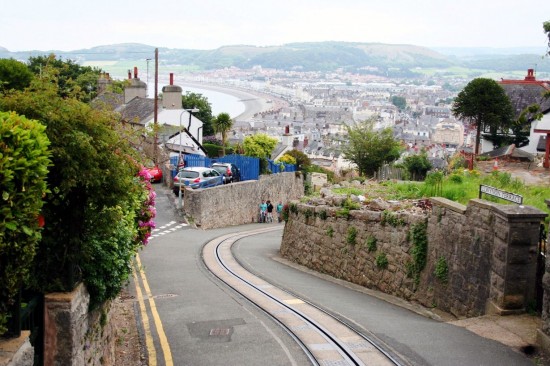 The spectacular views down towards the town from one of the lower section cars below Black Gate. 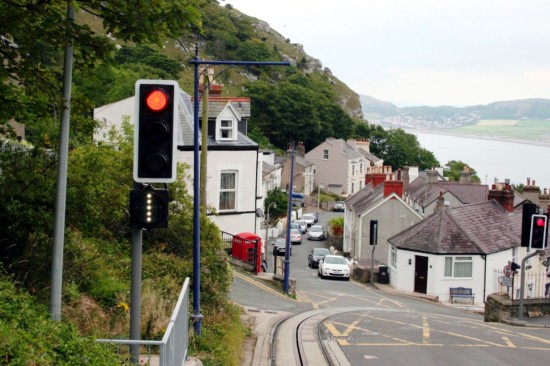 Another view from a lower section car looking towards the town. This location is Black Gate with a tramway signal in place.

From the Black Gate area the car enters the passing siding for the lower section of this funicular railway.  This is the second location along the Great Orme Tramway that I wished I had set up and gotten a picture of; I will have to remain content with this image taken from a downgrade car. 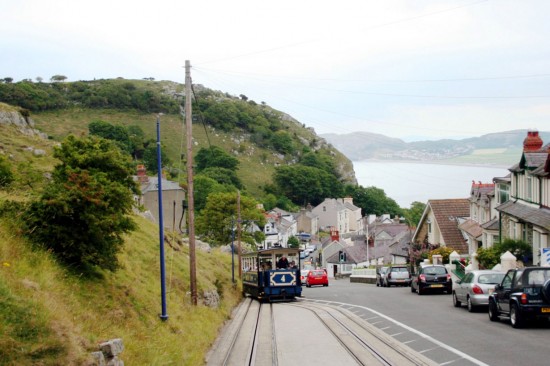 The lower section passing loop with 4 ascending the line where it will meet 5 (from which this photo is taken).

The lower tramway continues to parallel Ty-Gwyn Road to the Halfway station.  At this location I got off of the car and did not immediately continue my journey to the top of Great Orme.  Note that the Great Orme takes two rather tight curves, the first where Ty-Gwyn Road meets Ty-‘n-Y-Coed Road, the second at the intersection of an unnamed park access road; this was once the site of the Killen’s Hill stop. Arriving at the Halfway station I first walked on the downhill side photographed an approaching car, also turning around and getting a shot of the Halfway station on the lower section of the tramway. 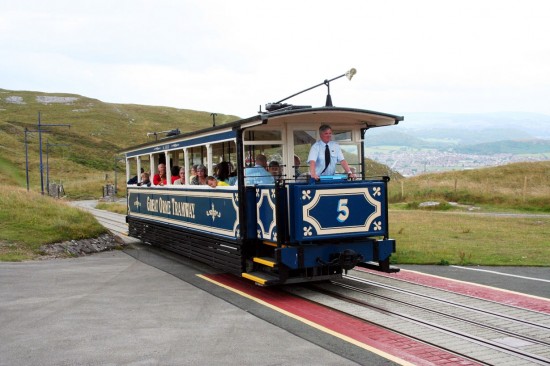 5 approaches the Halfway terminus on the lower section. 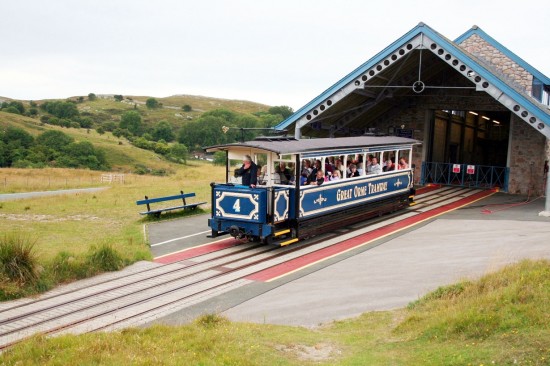 4 departs from Halfway for another descent to the town.

It was then time to walk through the Halfway station where a chance to photograph the hoisting machinery can be had. 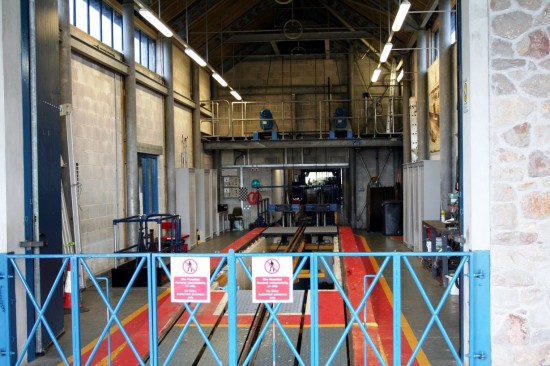 The winching gear and home for one of the trams overnight at Halfway.

It is now time to walk to the uphill side of the Halfway complex and photograph the action at that end of the station.  Great Orme Tramway cars 6 and 7 have been on this portion of the tramway since they had been delivered.  My first view was of the car departing the station and then I turned around to shoot a car arriving at the station. 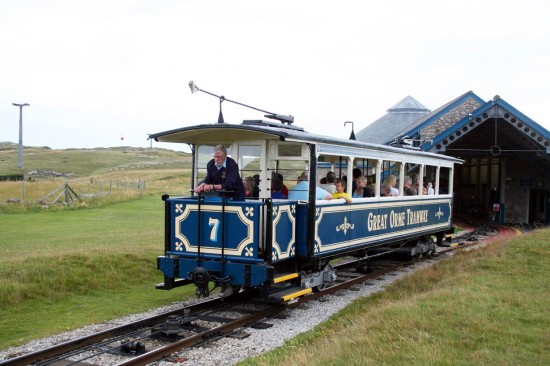 The upper section and 7 departs Halfway for the summit. 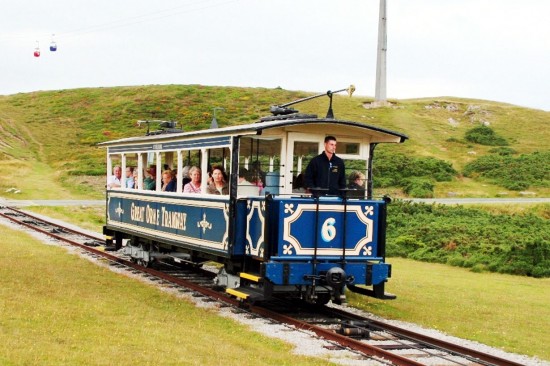 Before we leave this location it is time to whip out the telephoto lens, or just enlarge the electronic image and capture an image of the upper level cars in the passing siding. 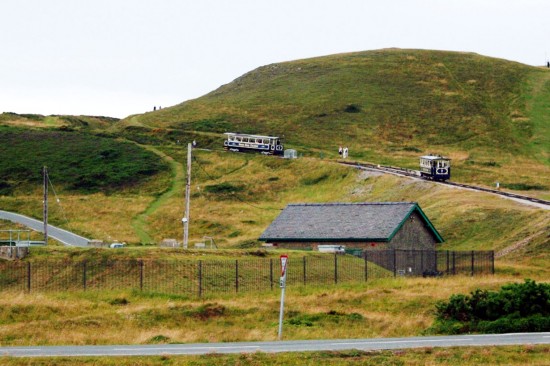 Just remember that with a telephoto or enlargement, less is often better.  Time to climb aboard a car and head to the upper level station at the Summit; originally called Plateau.  This is the end of the line (or should I say ‘lines’?).  I got off of the tramcar and walked a short distance downhill from the station to capture a picture of the car departing the station; waiting a few minutes for the uphill car to arrive. 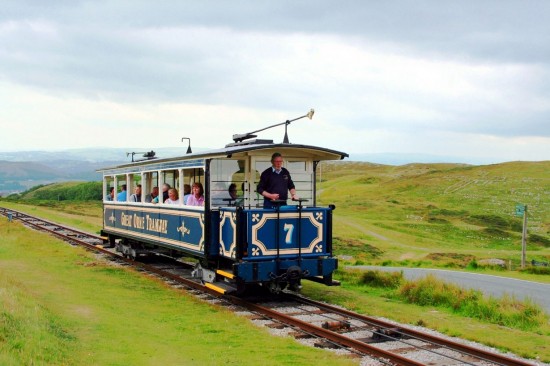 7 on the final approach to the summit. 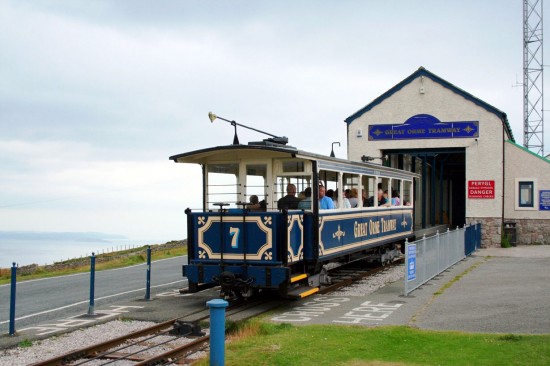 I then captured a picture of the Summit station.  I probably should have taken an additional image from a vantage point a little more to my left. 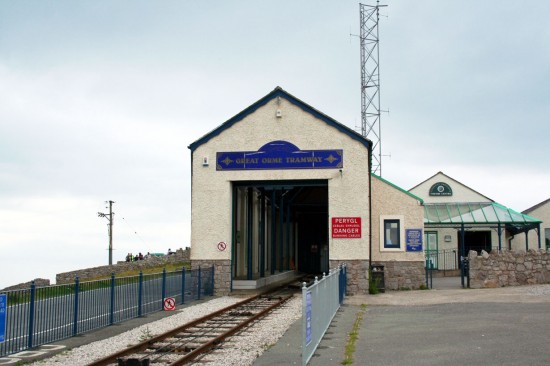 The Summit terminus building. (All Photographs by Edward M Koehler)

This concludes my trip over the Great Orme Tramway; again my purpose is not to show you what I have done but to give you some ideas about how to photograph this interesting little line yourself.

By the way, some of the material has Great Orme Tramway totaling 0.96 miles (both segments); the famous James I.C. Boyd stated that this line was 1.05 miles long.  Is there any reconciliation of these two numbers?

This entry was posted in Great Orme Tramway, Visitor's Guide. Bookmark the permalink.