Posted on Saturday 7 July 2018 by Gareth Prior

As our Picture in Time series from Blackpool takes a break for July we go back to more general traditional trams – with this edition featuring a tram from…Blackpooll! It’s a tram which has featured several times before in Picture in Time but as its such a stunner it’s back again – Blackpool Marton VAMBAC 11!

Last time we weere at the East Anglia Transport Museum in this series we were taking a look at two double deckers (which can again be seen here behind the main attraction) and this image was taken during the same visit in September 1973. Of course the tram which captures most of our attention is Blackpool Marton VAMBAC 11 which by 1973 had been in East Anglia for four years and had enjoyed a spell of operation on the short museum tramway but by this time seemed to be under overhaul with work in evidence on the side panelling.

Also present in this photo are former London Transport RT2827, LYR997 in the livery of Osbornes of Tollesbury who were then a well known Colchester area independent operator. And then we can see three, maybe four for those with better eyesight!, trams: Lowestoft 14, London Transport 1858 (just visible behind 14), Glasgow 1245 and Blackpool Standard 159. If you fast forward the best part of 45 years and all these trams – except for 1245 – remain on site at Carlton Colville. 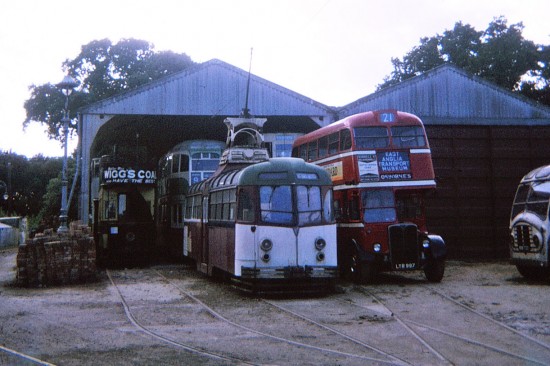