Balloon cars return – but not at weekends!

The eagerly-awaited use of several refurbished Balloon cars in Blackpool for the busy school holidays finally occured on Monday 29th October, when no less than five of the type were used in normal passenger service. The trams mainly operated between Pleasure Beach and Little Bispham on this day, to supplement the Flexity2 trams in the busiest section of the line.

The double-deckers used on this date were cars 700, 709, 713, 718 and 719. Although none of them had been used much during 2012, the appearance of 719 was especially noteworthy as this was its first use of the year with passengers, and also its first with widened centre entrances and the new fleet livery. The fact that 700 was also in traffic meant that, for the first time ever, two Balloon cars in matching purple and white livery could be seen together on the promendade. Despite the extra output, the busy school half-term holidays still resulted in some disruption with several instances of large gaps in the tram service, followed by an unintended procession of trams! Surprisingly, the five Balloons all ran in at dusk, leaving the Flexities to run the core service unassisted, with the illumination tour cars left to provide extra interest for those who were visiting for the day.

Although the decision to run the B Fleet for half-term week was commendable, it was also rather flawed in some respects. For some reason, a decision was taken to only use these cars from Monday to Friday, meaning that there will be no extra trams running on either of the weekends which ‘book end’ the school holiday period. These can often be some of Blackpool’s busiest days of the year so it is disapointing that the double-deckers were not used; indeed eyewitness reports on Saturday 27th October indicate that the tramway was struggling to cope, with huge queues of passengers waiting for long periods at almost every stop. Also, with many schools having their holiday a week early, it may have been wise to run extra trams last week as well, as the busy period was spread over a fortnight.

However, the sight of so many traditional trams – albeit those which have been heavily modified – being used for ordinary stage carriage work is an extremely welcome one. The B Fleet are of course the only old trams that are compatable with the new platforms at tram stops, and therefore the only ones which can be used for anything other than tours. It is understood that their operation will be closely monitered by Blackpool Transport, and let us hope that this will lead to more extensive use for them next season. 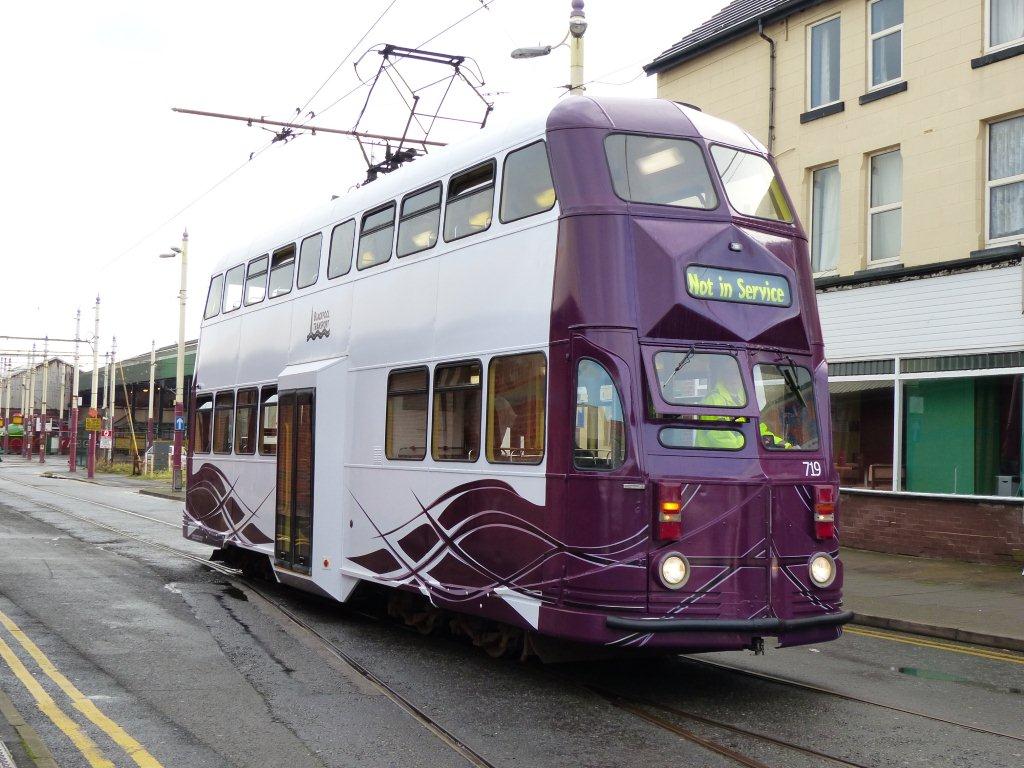 A historic scene as 719 leaves Rigby Road for its first day of passenger service in its new guise as a widened Balloon car, complete with Flexity-style livery. (Photo by Scott Moore) 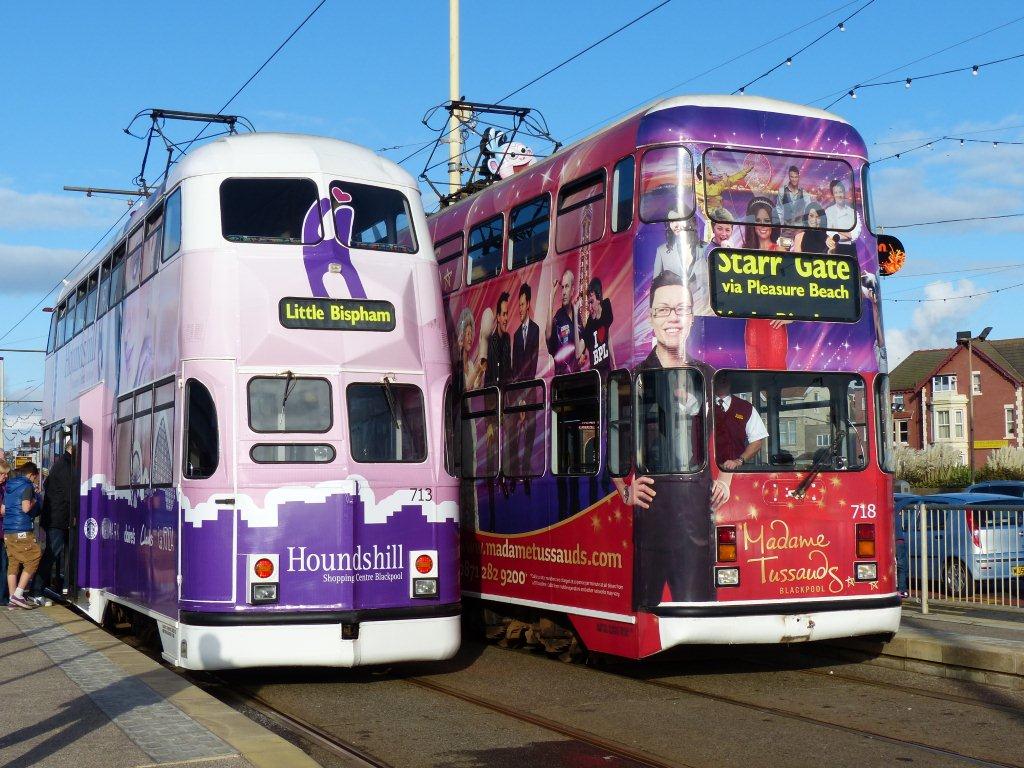 Cars 713 & 718, seen here at Pleasure Beach, retain their 2012 advert liveries, but will presumably also receive the new fleet colours in due course. (Photo by Scott Moore) 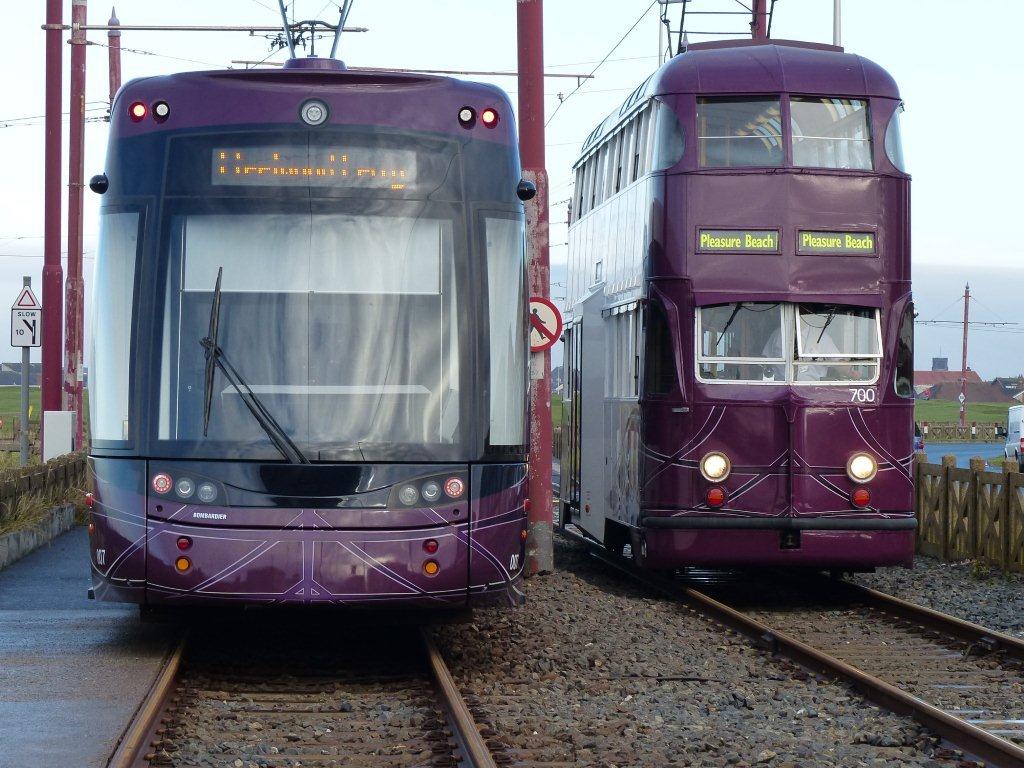 Contrasting trams in matching liveries on 29th October, and both have fleet numbers made up of the same three digits, just in a different order! Flexity 007 meets Balloon 700 at Little Bispham. (Photo by Scott Moore)

4 Responses to Balloon cars return – but not at weekends!