Around the World in Trams: Aigle-Leysin Railway

Posted on Tuesday 27 February 2018 by Gareth Prior

Switzerland is the location for this week’s photo from overseas as we take a quick look at one of the units operating on the Aigle-Leysin Railway.

The Aigle-Leysin Railway runs for just over 4 miles (6.5km) from the main line railway station in Aigle to its summit at the Grand Hotel at Leysin, rising 3,435 feet (1,047 metres). The line in its current length was opened in 1915 (with first tracks opening in 1900).

This view was taken in 1970 and shows a two car train formed of a motor and a trailer at Aigle Place du Marche. Both cars are in a chocolate and cream livery and date from the stock renewal of 1946. 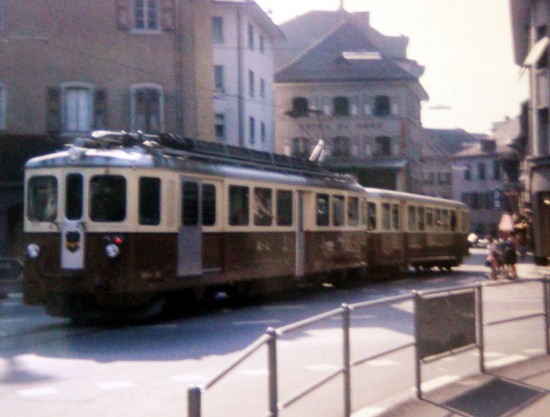