It was the event which seemed for a long time as it may never happen but on 31st May 2014 Edinburgh Trams finally opened to the public to bring an end to the project which saw the return of trams to the streets of Scotland for the first time since 1962 when Glasgow Corporation Tramways had closed.

There can be no getting away from the fact the Edinburgh Trams project was troubled and indeed for quite some time it appeared as if the whole thing may have been abandoned. Originally conceived as a tram network in the end the only section which was constructed was the line from the Airport to the City Centre with a terminus provided at York Place (this in itself was a small extension from the proposal to end trams at St Andrew Square). Over budget and very late the project was beset with difficulties with disputes between the contractor and the company created to help bring the plans to fruition in the news for a lot of the early 2010s Saturday 31st May 2014 finally saw the first passenger trams run in Edinburgh, the first trams to run in the Scottish capital for 57 and a half years!

In the months leading up to this opening date tram testing had been stepped up and trams started to be a regular site not only on the reserved track between Haymarket and the Airport but also in the city centre as trams finally mingled with buses and cars once again in Scotland. Friday 30th May saw a special run for dignitaries but the big day for the public was the following day with the first tram scheduled to depart Gyle Centre for York Place being at 0500. 275 was the very first tram to carry fare paying passengers with a packed platform at Gyle Centre waiting to make history. The first 10,000 tickets purchased were special edition Platinum versions and on that first day 21,000 passengers were recorded.

Since that date Edinburgh Trams has firmly established itself as part of Edinburgh’s transport network with extra services now running and the hope that an extension to Leith will be given the final go-ahead by the end of 2018. 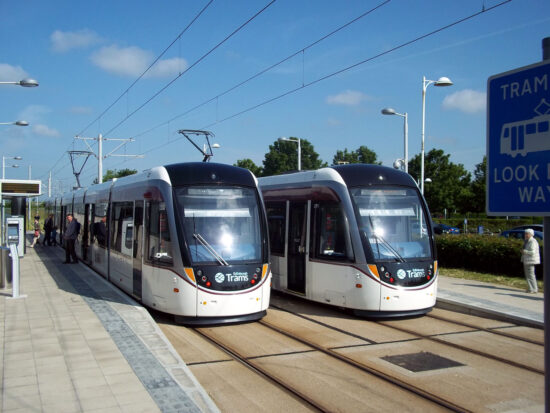 Opening day at Gyle Centre with 273 and 271 going their separate ways. (Photograph by Alasdair McFarlane) 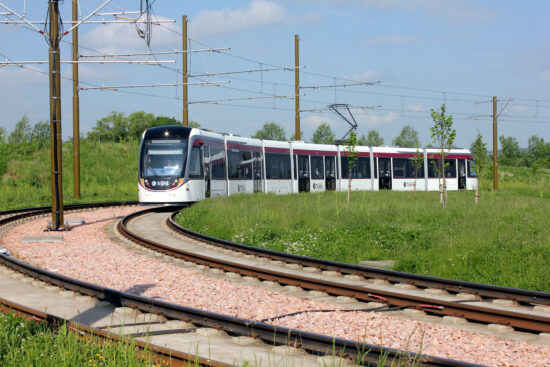 273 rounds the curve on the approach to Ingliston Park and Road on 31st May 2014 having just started out on its journey from the Airport to York Place. (Photograph by Ian Buck) 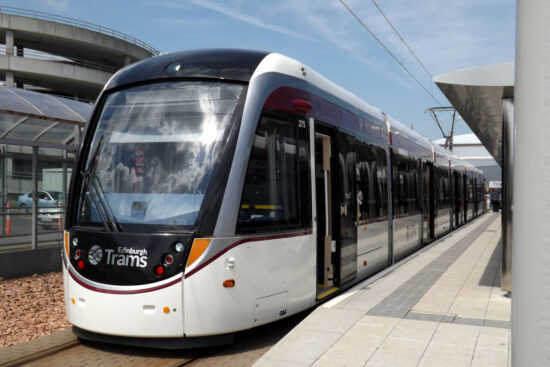 275 stands at the Airport on the first day. (Photograph by Martin Hague)