Nominations now open for Tram of the Year

Posted on Sunday 26 November 2017 by Gareth Prior

With December on the horizon it is that time of the year once again when we start to look back on the year to see which trams, tramways and events have stood out from the crowd enough to be crowned winners at the British Trams Online Tram of the Year awards. In 2016 we were celebrating Blackpool Marton 31, Manchester Metrolink 3120, the Douglas Bay Horse Tramway and the 140th anniversary of the same tramway as the winner but what has done enough to even make it onto the nominations list for 2017?

Once again we will be looking for nominations in four categories:

We are sure that you know what we are looking for by now – it is after all the 15th year we have run the contest – but just in case you need some inspiration we take a brief look at previous winners in each category below.

When Blackpool Marton 31 won this category in 2017 it was the ninth tram from the Lancashire resort to walk away with the award (with an additional two winners having actually operated in Blackpool!) so it is very fair to say that Blackpool is the dominant feature in this category (the only one which has run in all 15 years of the contest). Blackpool also has the only double winner, Brush Railcoach 623 winning in both 2007 and 2012.

But what of 2017? Is there another Blackpool tram that you think has done enough to make the shortlist? Or is there a traditional tram from elsewhere in the British Isles you think should be nominated? The choice is yours! As always we are looking for a tram which has done something special and it is entirely up to you what something special is, just please let us know why you think a tram should be nominated.

If the traditional tram category is dominated by Blackpool then the modern category is very much the preserve of Manchester Metrolink. In each of the three years this category has run a Metrolink tram has won from T68 1007 to M5000s 3100 and 3120.

But will Metrolink’s domination continue in 2017? Again you can nominate any modern tram (or LRV if you prefer) which has stood out from the crowd in 2017. It could be a new livery, it could be an entry into service, it could be the first tram on a route or there could be another reason entirely you think it should be on the shortlist.

In the five years of this category only Blackpool has won more than once with the award being spread fairly evenly with Heaton Park, Crich and the Douglas Bay Horse Tramway also winning the most votes in the contest.

2017 has probably been a steady rather than spectacular year for many of our tramways but is there a tramway which has been more successful than others in your opinion? There can be any reason why you want to nominate a tramway (which can be a system or an operating museum line) so let is know giving any reasons why.

Another five year category and in 2016 the stranglehold of Crich, Blackpool, Crich, Blackpool was ended with the 140th anniversary of the Douglas Bay Horse Tramway winning the most votes.

In 2017 we have seen several more excellent events across the British Isles but which one do you want to see on the shortlist? It can be any event on a tramway but this doesn’t necessarily have to be a special event on a heritage tramway it could just as easily be a line opening on an operating tramway. As always your nominations could make all the difference!

So, how can you nominate? There are three ways to submit nominations:

1. Leave a comment below. Just remember you do now need to register to post on this news blog. 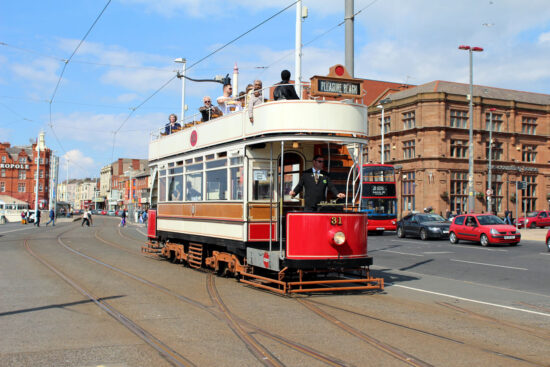 The winner of the 2016 Tram (traditional) of the Year was Blackpool Marton 31, thanks to its successful loan period back home. On 30th May 2016 we see 31 at North Pier on a warm and sunny day just made for it! (Photograph by Gareth Prior)

6 Responses to Nominations now open for Tram of the Year