Posted on Tuesday 7 November 2017 by Gareth Prior

Today Picture in Time is in North Wales for an image taken 21 years ago in 1996 on the Great Orme Tramway. The tram being featured is the highest numbered of the trams which have operated the service since the line opened in 1902 – no. 7.

7 has been dedicated to the upper section ever since that part of the Great Orme Tramway opened on 8th July 1903 (the lower section had opened the previous year) working alongside 6. The history of the passenger trams has been one of a few different liveries and minor changes but over the years they have all remained in service on their own parts of the line and 7 is no different. By the time this photo was taken on 1st August 1996 the tram was carrying the lined out blue livery as seen today.

This image is taken at Halfway and the main thing to notice is that this is the old Halfway Station which remained in place until the new building – with visitor centre – opened in 2001 thanks to major National Lottery, European Union and local Council funding to preserve the line for future generations. 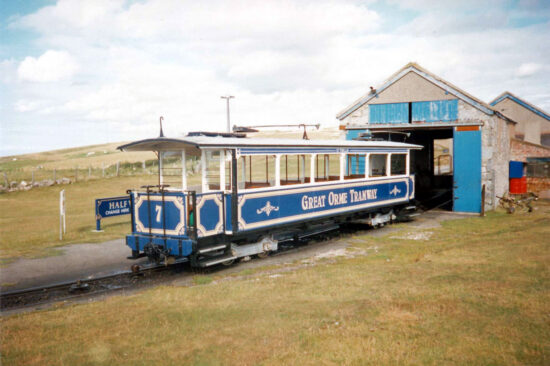