In this trip back in time we are heading to the Sussex coast again for another black and white image from the archives of the Modern Electric Tramways operation in Eastbourne with the tram featured this time being no. 7.

Dating from 1958 no. 7 was built to a similar design as no. 6 (built in 1956) as an open top double decker with a crossbench design of the lower deck although with the addition of two small saloons for when the weather wasn’t quite so good (indeed 6 took on this design during a rebuild in 1962). It has remained in this condition ever since (although has been regauged since moving to Seaton) but was withdrawn from service in 2007 with the intention that it would be overhauled. Despite this work being started it has now been paused for a number of years and the prospect of returning to the tracks seems to be as distant as ever.

In this view we see 7 at the Golf House Stop in Eastbourne in July 1963. 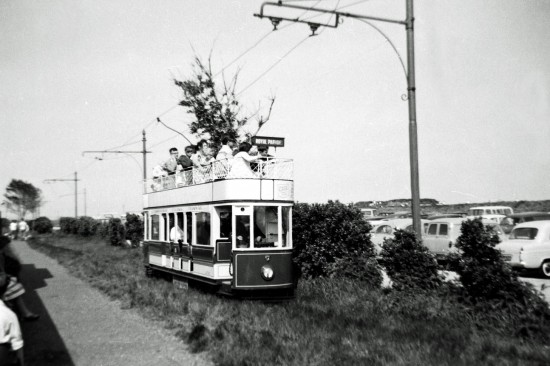