Posted on Wednesday 29 March 2017 by Gareth Prior

On 29th March 1947 it was the end of an era in Bolton when the last trams ran following 67 years of loyal service to the town. Who could have thought that fast forwarding 70 years and there would be a tram from Bolton still operating albeit in Blackpool? Well that is exactly what has happened and to mark the 70th anniversary 66 enjoyed a trip out on the Blackpool Tramway on 29th March 2017.

Having opened on 1st September 1880 as a horse tramway Bolton Corporation Tramways gradually expanded and by the time it was fully converted to electric operation it had reached over 30 miles of routes. Closures started in the late 1920s with the 1930s seeing major route closures although with the start of hostilities in World War Two there was a pause in closures. By the time war ended in 1945 there were just four routes remaining opening including the Tonge Moor route. This was to be the last line to close on 29th March 1947 with the last service car being 406 (440 was the last official tram).

Of the trams which had formed the Bolton Corporation Tramways fleet only one is still in existence today and that is the very familiar sight of Bolton 66 which has been in Blackpool since 1981. 66 – by then renumbered 366 – had been withdrawn from service in 1946 and the lower deck was sold for use as a Caravan on the moorland above Bolton. 66 was to be rescued for a group of enthusiasts who were keen to restore a Bolton tram and this was the most complete example to be found. With the lower deck restored as a static exhibit in 1975 (the original plan) the group decided to restore it as a fully operational tram which required the construction of an upper deck but this was achieved and by 1981 the tram was complete and looking for a home. The decision was made to take it to Blackpool for 6 months – and its still there 36 years later!

To commemorate the 70th anniversary of the closure of the last route 66 had been used on the Winter Gold heritage service in Blackpool on Sunday 26th March and then on the actual anniversary – 29th March 2017 – 66 was again out on the rails with the Mayors of Bolton and Blackpool on board along with members of the Crompton Family who had donated the tram to the 66 Group in 1963. 66 ran north to the Imperial Hotel where guests retired for lunch before returning to Rigby Road.

70 years on and trams are still missing from Bolton, but with Metrolink ever expanding its network who can say that it won’t include a line to Bolton in the future? 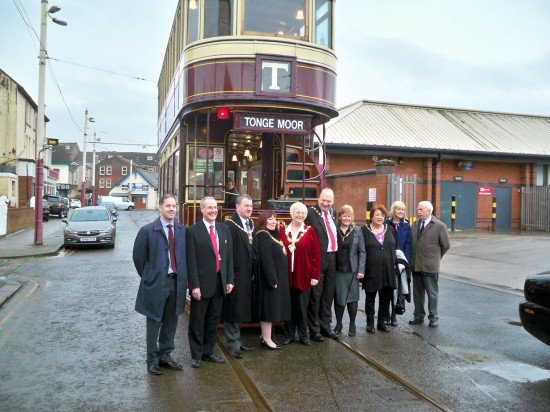 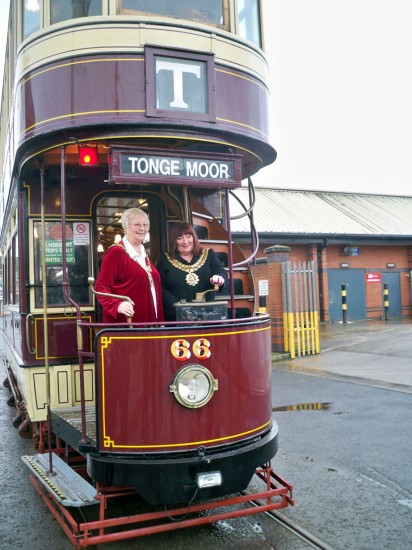 Bolton 66 stands outside Rigby Road Depot with the destination blind set for the final route to Tonge Moor. (Both Photographs by David Lloyd)