Posted on Friday 23 December 2016 by Gareth Prior

The Rail Accident Investigation Branch have released their safety digest into the electrical fire suffered by Blackpool Twin Car 272 on Saturday 24th September during the Anniversary Spectacular event in the resort. As was previously known the fire started as the tram was ascending from Gynn Square northbound and the problem which caused this fire has now been confirmed as a failure of cable insulation.

At the time of the incident the tram was being driven from the trailer and the driver was alerted to an electrical problem by a flash and loud bang from the buzzer unit in his cab. He was then advised by the conductor that there was a fire in the motor car. The tram was immediately brought to a standstill and all passengers and staff were evacuated without injury.

With the tram at a stand the driver decided that it was necessary to remove the electrical supply from the tram and the decision was made that this should be done by using a pole to lower the pantograph on the motor car. The only pole available was held in the motor car and the driver had to go into the smoke filled saloon to retrieve this to lower the pantograph. The safety digest suggests that a safer course of action would have been to place a radio call asking for the overhead supply to be isolated – however this course of action had not been included in the driver’s training.

Attempts were made to control the fire by both the crew and a member of the public. The conductor of the trailer car retrieved a small powder type fire extinguisher which was stored in a cupboard accessed by a break glass panel; the conductor suffered an injury to his hand whilst retrieving this. A member of the public then arrived on the scene with a water based extinguisher which made the fire worse (water on electrical fires is a bad idea).

As we reported at the time the fire service quickly attended the scene and brought the fire under control before the Twin Car was towed back to depot via Bispham using Unimog 939.

The fire was caused by the failure of insulation on a cable which ran from the pantograph to the main circuit breaker on the vehicle (via a roof fuse). This cable was constructed using Vulcanised India Rubber (VIR) insulation, on 272 this comprised multiple copper cores surrounded by VIR, and a woven cotton outer layer. It is believed that the VIR cable on 272 was that which was installed during the tram’s conversion to a Twin Car in 1960 and VIR cable insulation degrades over time making it more susceptible to mechanical damage. Cable repairs had been undertaken in May 2015 close to the cable which failed and the digest suggests this may have caused damage to adjacent cables. Water ingress is also thought to have been a possible factor in the fire as this would cause an unintended path for the current to flow; this current flow caused the cable to heat to a point where it caught fire. However due to the severe localised fire damage it is impossible for the RAIB to say for certain that this was the cause. It is unclear if the initial ignition occurred in the woven cotton surrounding the cable or in the timber structure in close proximity to the cable.

In the aftermath of the fire Blackpool Transport decided to put a number of trams with wiring a similar age to 272’s through electrical assessments to determine whether any work was required to keep them in good running order.

This is one of three important safety messages suggested by the digest (as it isn’t a full report there aren’t recommendations as such). In addition to “managing the risks associated with ageing cables on heritage vehicles, particularly tramcars” the following safety messages are provided:

* Ensuring that staff involved in the operation of electrically powered vehicles are aware of all means of removing the traction supply from the vehicle in an emergency. This can include lowering pantographs/trolley poles or requesting an emergency isolation from the control room.

* Ensuring that, where emergency equipment is protected from misuse by means of break glass panels or similar, such panels are of a design that minimises the risk of injury.

The full RAIB safety digest can be viewed on the RAIB website. This includes photos of the internal fire damage. 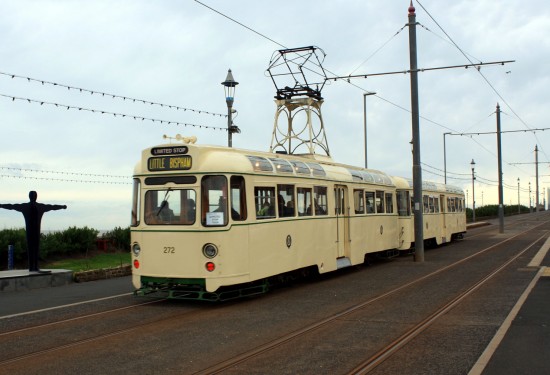 Twin Car 272+T2 is seen here just before the fire started. The tram – with trailer leading – is just passing through Gynn Square with this view showing the Motor car at the rear. 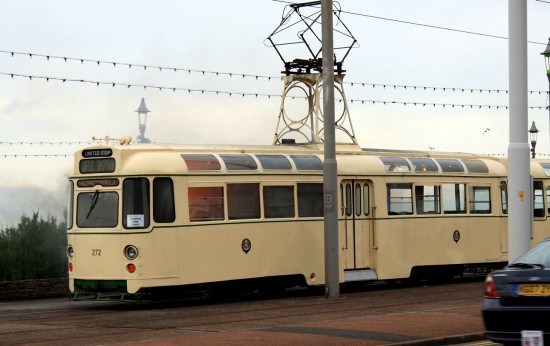 Taken from the opposite side of the road in this view we see the early stages of the fire with pantograph still raised. (Photographs x2 by Nigel Pennick) 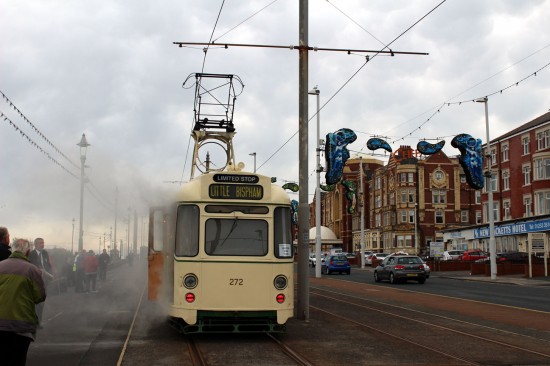 Another look at 272 during the fire and before the fire service had arrived. 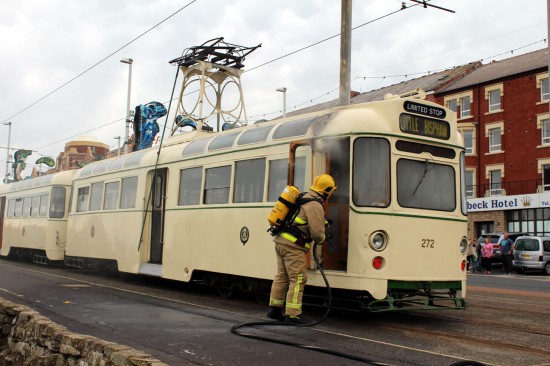 The fire service are now on the scene and investigating the source of the fire. 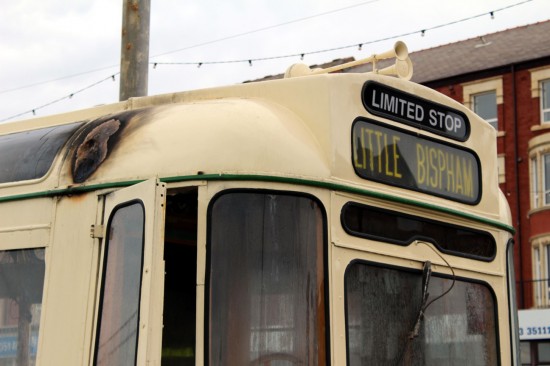 A close-up of the external fire damage on 272. (Photographs x3 by Gareth Prior)