Posted on Saturday 3 December 2016 by Gareth Prior

We take a trip to Wolverhampton for our latest archive image as part of Picture in Time as we feature an image of one of the T69s in action in the year 2000.

The tram we see in this image is 04 as it departs from Wolverhampton St George’s with a service for Birmingham Snow Hill on 30th May 2000. Of note is that the tram is departing from the outer platform which has since had its track removed and a new coach stop constructed.

04 had been delivered to Wednesbury Depot on 30th June 1998 and after the lengthy wait for the line to open entered service on the first day of operations – 30th May 1999. Like many of its fellow T69s 04 went about its business on a near daily basis retaining the original livery throughout its career. It received the name Sir Frank Whittle following 01’s early withdrawal and itself remained in service until February 2015 when the axe fell. After a period of storage it departed Wednesbury on 23rd March 2016 and is now stored at Long Marston. 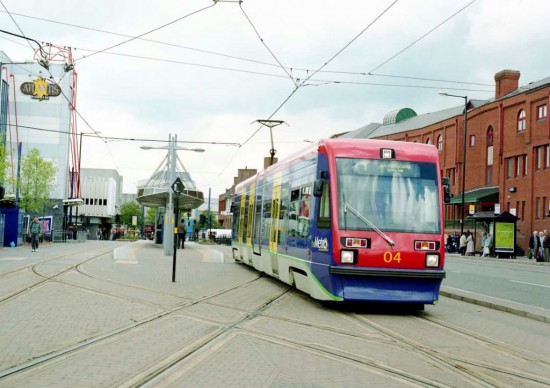