Posted on Saturday 29 October 2016 by Gareth Prior

Normally in our Picture in Time series we see a tram either in service or resting in between duties but for our latest instalment we head to Rigby Road bus yard for a view of Blackpool Coronation 664 which was getting ready for a date, a date with the scrapman.

Carrying the Half Green, Half Cream livery with orange trolley tower 664 had been withdrawn at the start of October 1971 and when this photograph was taken in July 1972 the tram only had three months left before scrapping which was to take place in October 1972. Destination blinds have already been removed and the windscreen also seems to be missing but many of the other visible fixtures and fittings still seem to be in situ. 664 is joined in this waiting area by another of the unlucky Coronation Cars which was due to be scrapped. 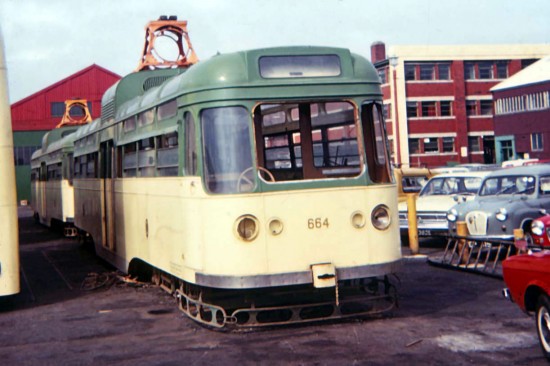