In Pictures: ‘B Fleet’ Balloons take over Tram Sunday!

The Fleetwood Festival of Transport, more popularly known by many people as ‘Tram Sunday’, was held on Sunday 17th July and, as per last year, proved to be an excellent day for the heritage tram fleet. In fact, this was the climax of three days of interest on the Blackpool tramway – and unusually much of this centered around the modified ‘B Fleet’ Balloon cars, rather than the more traditional members of the fleet.

The excitement got underway on Friday 15th July, with a special late afternoon tour to celebrate the return to service of Millennium car 718. Along with the other three flat-fronted Balloons, 718 had not run since 2013 so its return was very well supported by enthusiasts. In recent weeks the tram had been stripped of its vinyl wrap advertising Madame Tussaud’s, revealing a plain white base coat beneath. It is to the credit of those employed in removing the expired advert that the paintwork underneath looks very tidy and, whilst a big white tram may not be the prettiest vehicle to be seen, it has added some extra novelty value to the tramway. Despite some minor issues which delayed its departure from Rigby Road depot, 718 ran superbly for the remainder of its tour which included two runs to Fleetwood Ferry. Despite the lack of a proper livery, it is expected that 718 will be used on illumination tours this autumn, providing a warm and comfortable vantage point from which to view the lights.

A more normal six-car heritage service then ran on Saturday 16th July. This was dominated by the Balloons with cars 700, 717 and 723 all in use, along with Bolton 66, Twin set 675+685 and Railcoach 680. Happily much better weather arrived the next day for the festival itself, which started very early for Box 40, 680 and 700, all of which ran empty to Fleetwood to be stabled on Pharos Street for static display before the roads were closed off to traffic. The heritage service was then worked by Boats 227 and 230, Twin set 272+T2, Balloons 701 and 715 and, most unusually of all, Balloon 713. This was the tram’s first outing of 2016 and its first ever use on heritage tour work, although it did appear on four days last year for normal stage carriage work. Still wearing its stunning advert livery for the Houndshill shopping centre, 713 was naturally in great demand with enthusiasts. Indeed, all of the trams carried good loads of people all day whilst the festival itself was as well attended as usual. The six cars maintained a frequent service between Pleasure Beach and Fisherman’s Walk, offering several opportunities for a good long run throughout the day. The weekend concluded with the three static exhibits heading back to Rigby Road as the sun was setting on a most memorable and enjoyable weekend of events. 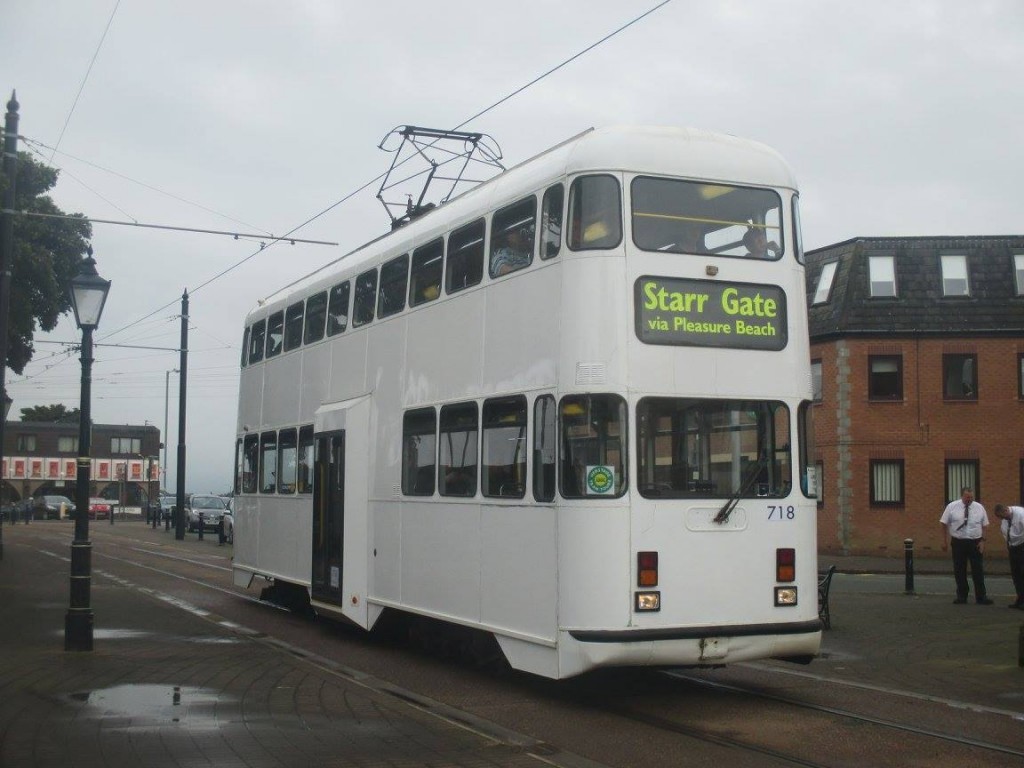 Welcome back 718! Now devoid of advertising vinyls, the tram poses on Pharos Street during its launch tour on the evening of Friday 15th July. 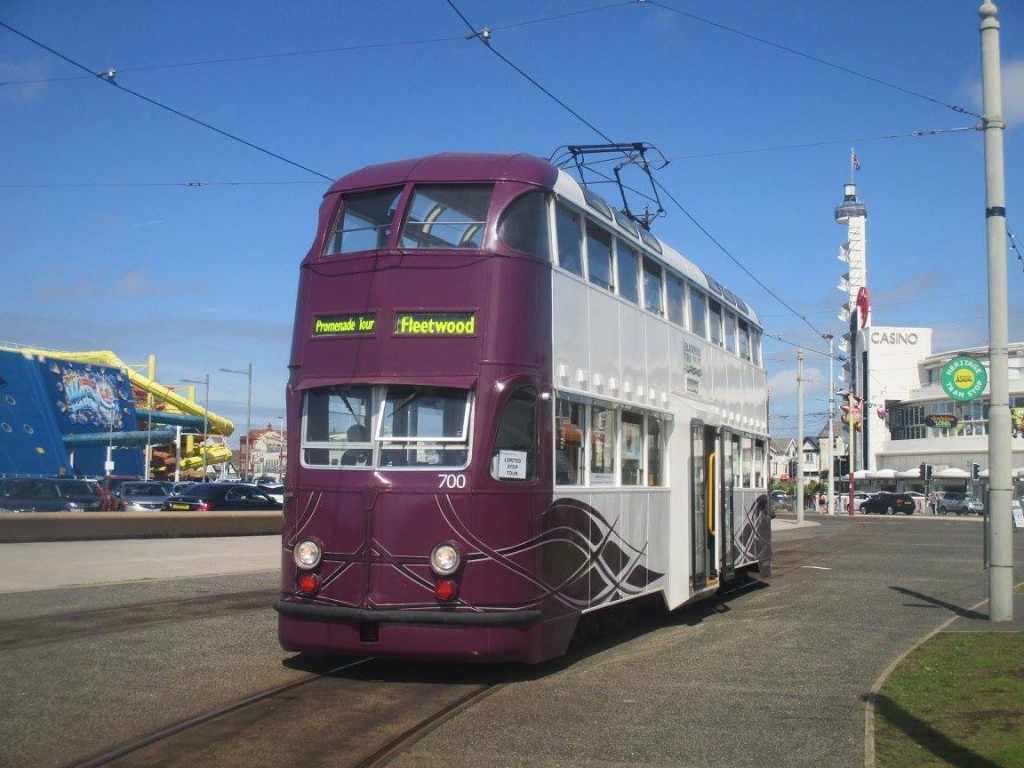 With the heritage tram souvenir shop on board, Balloon 700 is seen at Pleasure Beach on 16th July. 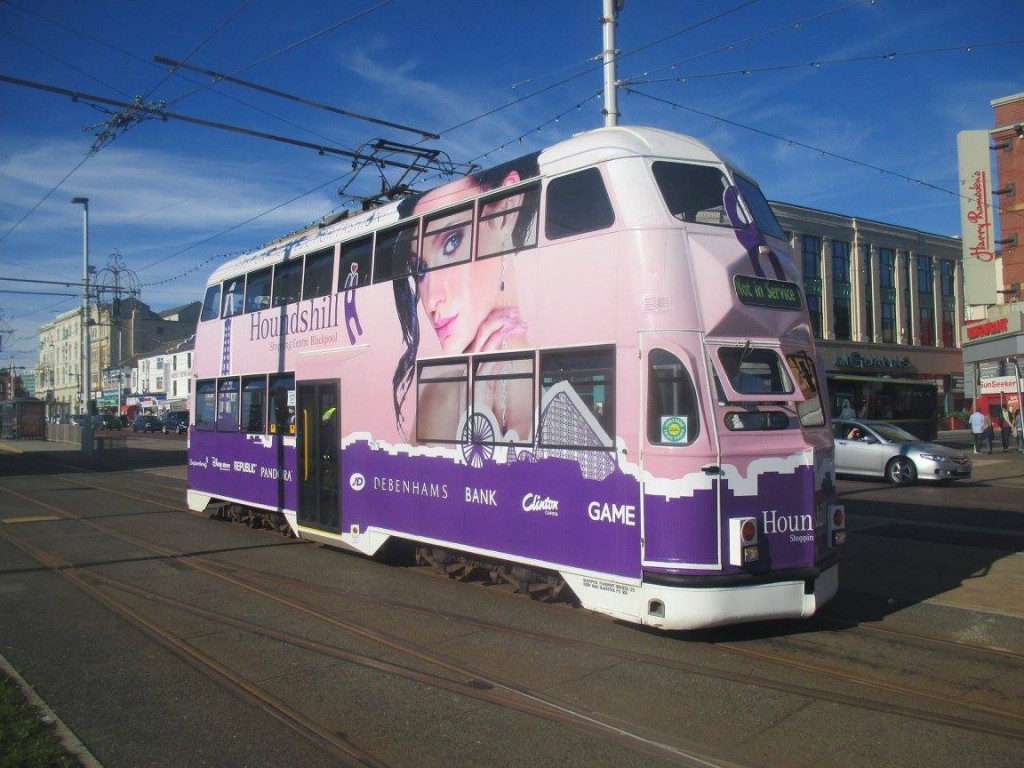 The weekend finale with 713 and its attractive advert livery seen at North Pier as the tram heads back to the depot after a busy day on heritage tours. (All photos by Rob Bray)

24 Responses to In Pictures: ‘B Fleet’ Balloons take over Tram Sunday!