In Pictures: Blackpool Brush 636 on its travels again

Earlier this week we talked about Blackpool trams ending up in unusual locations for unusual purposes and another tram which falls into that category is Blackpool Brush 636. The Brush Railcoach – which originally left Blackpool as long as ago as 2006 – has been on the move again with it finding its way to the Ecclesbourne Valley Railway where it is believed further testing will take place.

Since withdrawal in Blackpool at the end of the 2004 season 636 has led a rather nomadic and elusive life. Having been acquired by Stored Energy Technology the tram left the northwest for Derby in 2006 where it received attention which involved the fitting of an experimental motor and bogie. A return to Blackpool for testing on the tramway followed in 2009 (with the section between Pleasure Beach and Starr Gate closed to allow for the testing to take place during the close season) after which it headed back to Derby. Apart from a brief trip to Long Marston in 2014 not much has been known of 636 in recent years but all that has now changed with the tram moving a few miles to north of its long-term home.

Details of what is being tested and how long it will be staying at Wirksworth will be released in due course. 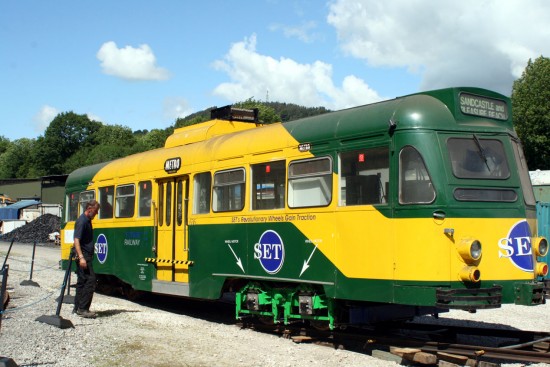 8 Responses to In Pictures: Blackpool Brush 636 on its travels again