Preparations for a special event at the Heaton Park Tramway over the May Day Bank Holiday weekend have included commissioning Blackpool Brush car 623 for service. This tram hasn’t operated so far this year and it was feared that it may be destined for a lengthy lay-off after concerns were expressed about the condition of its brake blocks. However, after further assessment it has been passed as fit for limited use and should be used again on 1st and 2nd May.

The commissioning process has included a deep interior clean for the Brush Railcoach, however it is acknowledged that more detailed work will be needed for the car to be used on a regular basis. To carry out the suggested work access to the inspection pit inside the Middleton Road depot will be required; as this is currently occupied by Stockport 5 which has its decency panels suspended in mid-air, this will have to wait a while.

The May Day weekend ‘Extramaganza’ should therefore see up to four trams in service on both Sunday 1st & Monday 2nd May, with 623 available alongside Hull 96, Blackpool 619 and Manchester 765. Although not originally intended as an enthusiast event, the opportunity was taken to exploit the expected high number of visitors to the park by providing an intensive tram service. In addition, it is hoped to provide a non-operational tram for static display outside Lakeside depot on both days: on Sunday, Manchester 173 should be brought out and fellow Manchester car 765 will be posed alongside it between 1100 and 1200, and 1500 and 1600. The following day, Blackpool Balloon 702 will be taking its turn in the spotlight and for part of the day it will be displayed next to 623. The planned vintage bus service will not be operating after all but at least there should be plenty of tramcar activity taking place on this weekend. 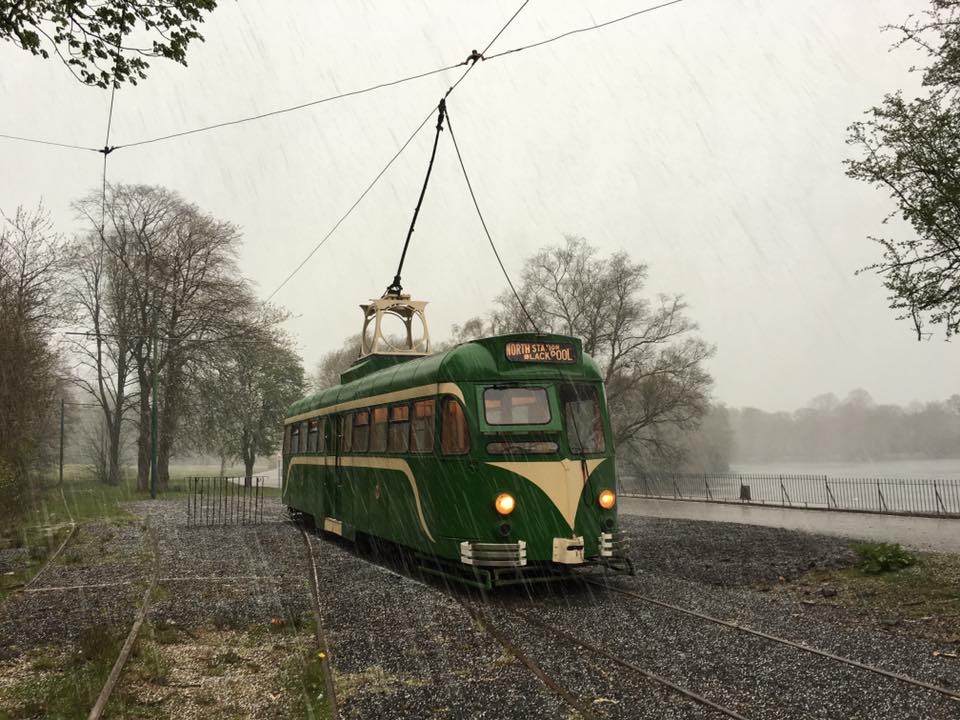 A shunting exercise on Tuesday 26th April brought Blackpool 623 outside - and then it snowed! The tram is pictured at Lakeside in a blizzard. (Photo by Shaun Whitehead)