The project to return one of the Manx Electric Railway’s “Ratchet” cars (so called because they were not fitted with air brakes and relied on the ratchet hand brake system) to service is continuing at Derby Castle Sheds with no. 14’s restoration making progress. The chance to see the latest progress on the restoration was available during shed tours which took place as part of the Rush Hour on the Railways event over the Easter weekend, a chance that David Mee took…

Car 14 is undergoing a meticulous rebuild in a joint venture between the MER paid staff and volunteer supporters. The volunteers are taking on the bodywork, with a full strip back and rebuild/repaint in progress. This aspect of the project is now about 45% complete, with the vanity panel and lamp box recently reinstalled at one end. The woodwork is in a remarkably good condition and the car should look stunning when it is completed in its original livery. The mechanical and electrical overhaul is being done by the MER staff when time is available and between other commitments with the core running fleet. This is only about 10% complete, an overhauled controller recently installed at one end. All parts will be fully reconditioned and the car totally rewired. If all goes to plan then some time in 2017, after a gap of fifteen years, the MER will once again possess a fully functioning, non-air brake fitted, traditional Ratchet Car and the islands car owners will once again have to listen out for the sound of the foot pedal operated gong instead of the shrill whistle of the air fitted cars!

More information on the restoration of the car at
https://manxelectricrailway.co.uk/car-no-14-1898/restoration.

* Full coverage of Rush Hours on the Railways will follow in the next few weeks. 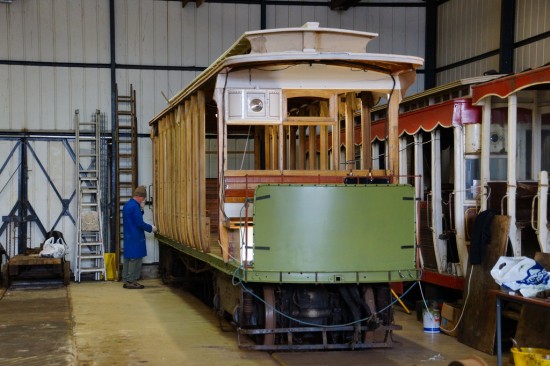 A head on view of 14 in the sheds at Derby Castle. 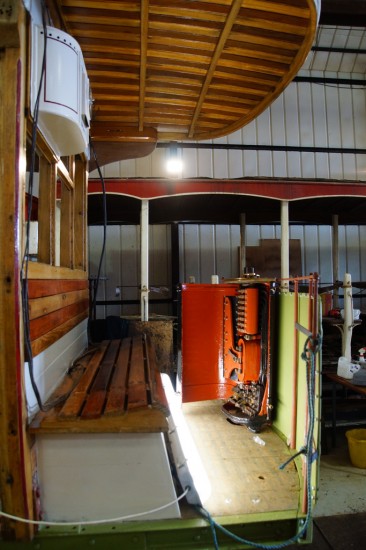 A view of the front platform showing the controller which has recently been fitted.

A side on view of 14 as work continues on its restoration. (All Photographs by David Mee)