Posted on Sunday 6 December 2015 by Gareth Prior

Manchester Metrolink T68 1017 is the latest tram to feature in our Picture in Time series as we take a look at the tram in 1992 at Altrincham.

It look only a little over two months between delivery and entry into service for 1017 with the tram arriving in the city on 18th February 1992 and then it carried its first passengers on 27th April – the first day of cross city operations. Over the years the tram has suffered a derailment (1994) and was involved in a collision with a bus (2006) and also went to Wolverton Works in 2005 for refurbishment works. This saw the tram absent from service between August and November 2005. In 2012 it became the last of the T68s to undergo works under the Universal Running modifications project and the following year it made history as the last T68 to call at Woodlands Road with a city bound service at the end of 2013 before the stop was closed. The tram didn’t last much longer in service with it being involved in a collision with a car close to Exchange Quay stop on 10th January 2014 and although repairs were carried out it was never to run in service again with it being the 26th of the combined T68/T68A fleet to be withdrawn. 1017 stayed in Manchester until 23rd October 2014 when it made the dreaded one way trip to Rotherham for scrapping.

We have two photos of 1017 on 11th June 1992 at Altrincham Station. The line between G-Mex and Altrincham opened four days later and so these images show the tram during the final stages of testing and clearly show the original Manchester Metrolink livery without the aquamarine doors which really did make it a rather uninspiring and plain colour scheme. 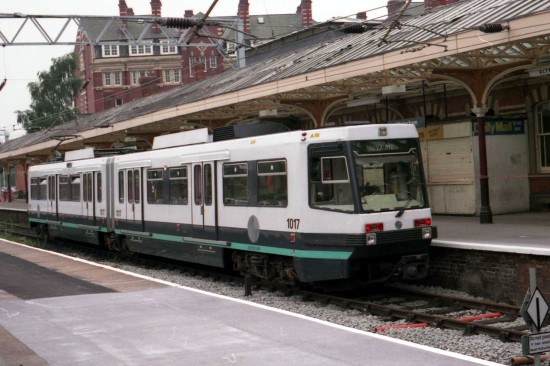 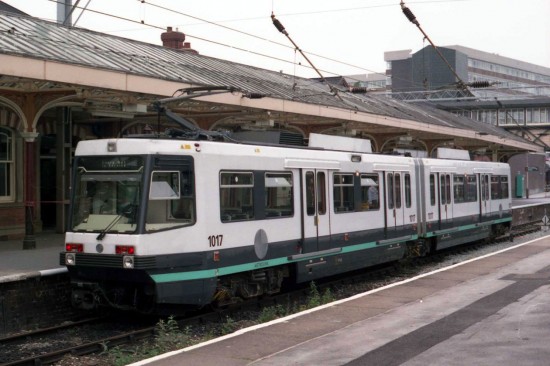 * If you want to know the full story of the Manchester Metrolink T68 and T68A fleet why not get a copy of the excellent “Superb: A tribute to the Manchester Metrolink T68 and T68A Light Rail Vehicles” by Andrew Coward and John Henderson – it’s an ideal Christmas present for any modern tram enthusiast. You can purchase direct from the publishers at http://www.buryrossendalerails.com/.

One Response to Picture in Time: Manchester Metrolink 1017