Today we turn the clock back eight years with a view of two Centenary cars at Pleasure Beach as the sun falls on one of the first evenings of the 2007 illuminations season in Blackpool. Despite being relatively recent, much here has changed although these two trams will soon be seen together again at this location, albeit not both in an operational condition.

Back in 2007 the Centenary cars were the unappreciated workhorses of the Blackpool tram fleet and all of them were painted in various different colour schemes, the green and cream corporate livery having disappeared from this class some years earlier. Here, we see two examples in particularly striking advert liveries: 641 is showing off the second off its three designs for the Orion Bingo centre at Cleveleys (since closed and demolished), whilst 648 carries a more restrained design for the Vue Cinema complex, also in Cleveleys. These were of course the first two Centenary cars built with 641 entering service in 1984 and 648 following a year later, then known as 651 and kitted out with experimental equipment for GEC Traction. This did not exactly prove to be a great success, and as a result Blackpool Transport opted to purchase the body only which was re-equipped as a conventional Centenary car, entering service in this form in 1990.

Both cars were expected to be withdrawn in 2011 due to the introduction of the new Bombardier Flexity2 trams, but happily 648 ended up staying in Blackpool and has subsequently been restored to its attractive 1980s green and cream livery, and is now a fairly regular performer on the revamped heritage service. 641 has endured some years of outside storage since being acquired by the Fleetwood Heritage Leisure Trust, and is now the subject of a new project to create a static display celebrating the history of a local football team. The tram will soon be placed on display at Pleasure Beach, although plans to have it in situ before the big switch-on have proved too ambitious – but the chances of seeing it join 648 on the loop are decidedly slim!

As an aside, note the old track layout at Pleasure Beach: 2007 was the last season when trams travelled around the two loops in opposite directions before the present layout was introduced. This is highlighted by the direction of Bolton 66‘s trolley pole! Also note 643 further forward on the outer loop, in its G Casino advert. This tram is also owned by the Fleetwood Heritage Leisure Trust but is expected to leave the Fylde coast after being offered for sale recently. 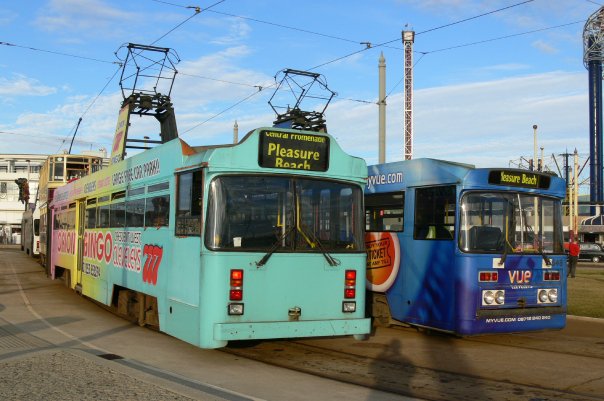 641 and 648 repose in the early evening sun on a busy illumination Saturday in 2007. The lack of lettering, or even fleet numbers, on this end of 641 is due to a previous collision which resulted in new panels being fitted after the advert was applied. (Photo by Andrew Waddington)