Blackpool Brush 290 which has spent the past three years on display adjacent to the Pleasure Beach loop in a variety of guises is set to enjoy undercover storage for the first time since 2012 as part of an agreement between its owners the Fleetwood Heritage Leisure Trust, Blackpool Transport and the Blackpool Heritage Trust. It is expected that the tram will be transported the short distance to Rigby Road later this year and replaced by Centenary 641 which will be the centerpiece of a Blackpool FC centered display for the 2015 Illuminations.

290 – as 627 – was acquired for preservation by the Fleetwood Heritage Leisure Trust following its withdrawal from service and has received three different liveries during its time on display. The first was to celebrate the Queen’s Diamond Jubilee in 2012 and this was followed by a graffiti style livery as part an urban street art project – with the artwork by Inkie. Then in 2014 a green and cream livery style as applied and it is this livery which the car retains today. It is planned that 290 will be conserved in this style upon its removal to Rigby Road but it is hoped that in the future it may be installed as a visitor display or information point to be incorporated at the planned Blackpool North tram terminus and transport interchange.

The agreement reached between the Fleetwood Heritage Leisure Trust, Blackpool Transport and the Blackpool Heritage Trust will see the tram transported to Rigby Road for undercover storage before 641 is placed on display instead. This arrangement follows on from the recent renewal of the storage of Jubilee 761 and cements the positive working relationship established this year between the parties.

Work on turning Centenary 641 into the Blackpool FC celebration tram is continuing at the Fleetwood Heritage Leisure Trust’s Wyre Dock storage facility and it is expected that this work will be completed by the end of August so that it can be moved to Pleasure Beach for the duration of the Illuminations. 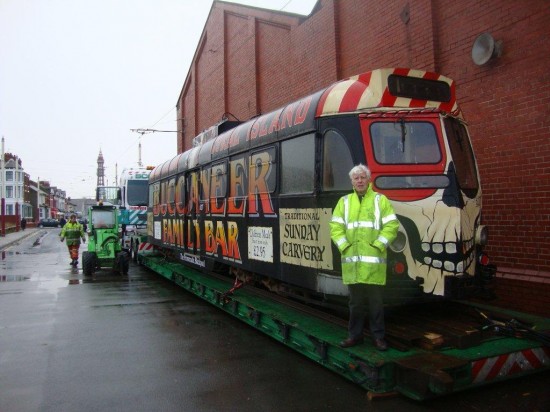 The four different looks of 290. When acquired by the Fleetwood Heritage Leisure Trust the tram was in this all over advert for the Bucaneer Bar at Coral Island. Here FHLT trustee Colin Macleod is seen alongside the tram as it is loaded on Blundell Street. 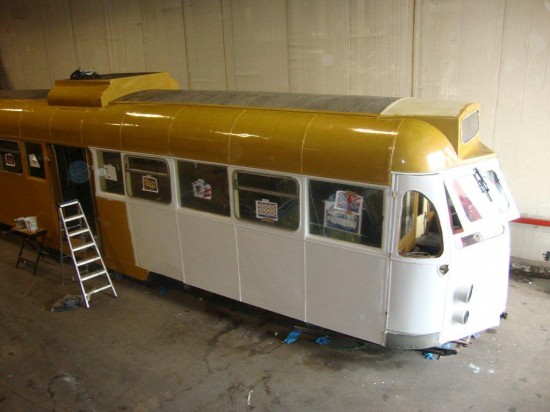 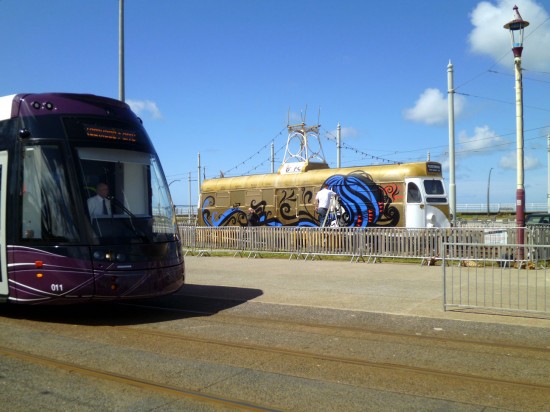 Inkie gets to work on creating the graffit style livery. 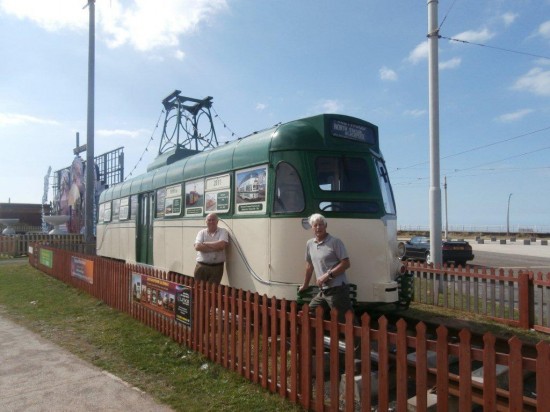 John Woodman and Colin Macleod from the FHLT are seen alongside 290 in its current green and cream guise at Pleasure Beach. (All Photographs courtesy of Fleetwood Heritage Leisure Trust)

2 Responses to Brush 290 to go undercover