Today our “Picture in Time” tram features probably one of the most controversial repaints ever seen on a heritage tram – the British Steel advert livery on Sunderland 100 when it ran at the Gateshead Garden Festival.

Today we all know Sunderland 100 better as Metropolitan Electric Tramways 331 and it has become a regular performer at Crich. Of course the tram did begin its life as 331 and entered service in London during December 1930 and is one of the iconic Feltham trams. As a prototype this tram featured a centre entrance (the production models had entrances at the ends) and this proved to be its downfall when the route on which it operated was closed. Many of the class were transferred onto a route which required partial conduit operation but it was decided the centre entrances precluded this and in August 1936 – less than 6 years after an entry into service – this modern looking tramcar was withdrawn from service. Fortunately Sunderland came to the rescue and 331 – renumbered as 100 – went to the northeast where it remained in service until 1952. Acquired for preservation the tram was not to see any use until 1988 when after workshop attention it entered service as Sunderland 100 and then in 1990 it was transferred back to the northeast for use at the Gateshead Garden Festival. Unfortunately at this time the decision was taken to paint the tram in an advert livery for British Steel – in the same style as the Sunderland livery but blue – and it ran like this throughout the Festival. Returning to Crich the tram was repainted into standard Metropolitan Electric Tramways livery in which it remains today. Although it has spent some time out of service during the intervening years it is in the operational pool more often than not. 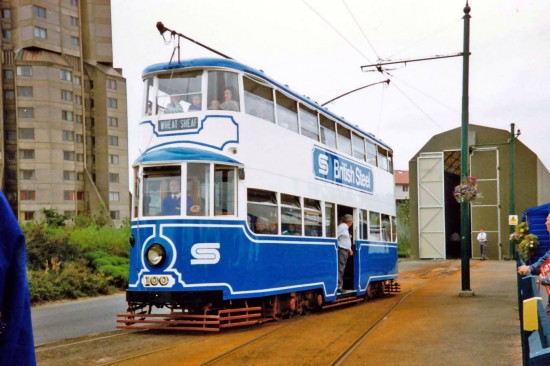 8 Responses to Picture in Time: Sunderland 100