It’s 1981 again for our latest Picture in Time image as we head back to Blackpool and feature Twin Car 676+686 rounding the Metropole Hotel.

The towing car of this set started out life as Second Series English Electric Railcoach 276 was was the very first tram to be converted for trailer operation in the late 1950s. It entered service in April 1958 and initially ran with another English Electric Railcoach which had been converted into a trailer with no electrical equipment – 275 – but after the project was deemed a success, further conversions of the Railcoaches took place and 10 trailers were ordered. One of these trailers was T6 which entered service at the start of the 1961 season and it is thought that it only ever ran with 276 as it was at this time that Blackpool Transport had made the decision to keep the motor and trailers with their numerical partners on a regular basis. Obviously 276, however, had run with other trailers previous to this. At the end of 1969 676+686 (as they had been renumbered the year before) were permanently coupled together and they then settled into regular use on the remaining Promenade route and at the time of this photo that is exactly what they were doing.

In this view we see 676+686 approaching North Pier having just passed the Metropole Hotel on 16th August 1981 with a Boat Car heading in the opposite direction. At this point the tram would still have 23 years left in service with the pair being withdrawn at the end of the 2004 season. They remain stored at Rigby Road Depot. 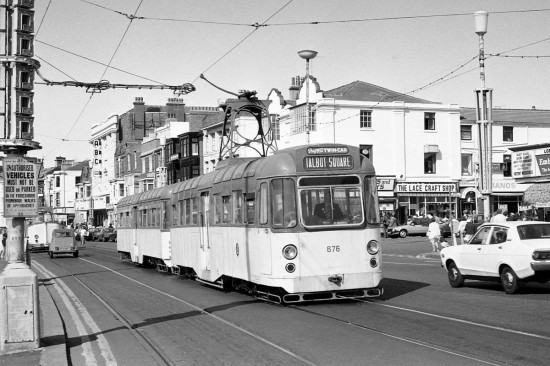