Posted on Friday 8 May 2015 by Andrew Waddington

The good news keeps coming from Blackpool Transport’s heritage tram team, who have continued to make improvements to the service that is offered by the traditional tram fleet remaining in Blackpool. Their latest amendment concerns the blue timetable, whilst a seperate announcement has revealed that heritage trams will be running to Starr Gate for the first time this year on Sunday 21st June.

Since its inception, the blue service has seen two heritage trams operate solely between Pleasure Beach and North Pier. Now that is set to change, with the introduction of a couple of slightly longer runs on every day that this service operates. Starting on Saturday 9th May, the first southbound working of the day will commence from Cabin at 1000 instead of North Pier, offering a slightly longer ride for anyone who is out early to enjoy the heritage trams. Similarly, there will be a northbound trip from Pleasure Beach to Cabin, scheduled to depart at 1640. At all other times the trams will run between Pleasure Beach and North Pier as before in order to maximise their appeal and visibility to the general public; however the latest tweaks to the service should be well received by enthusiasts and once again prove how keen the team are to ensure that the service is as appealing as possible to all.

In a separate development, it has also been revealed that the heritage fleet will grace New South Promenade with their presence on Sunday 21st June, when the tours will run to Starr Gate. On this date a gold service is due to operate with six different trams, although no further details of what sort of service will be running have yet been announced. This day was of course supposed to be the date for the 2015 Totally Transport event until this was sadly cancelled, so the news that the heritage tours will still run to the southern end of the tramway in spite of the lack of other attractions is extremely welcome, and will ensure that this is a popular event anyway for those of us who enjoy rarities on the tramway. 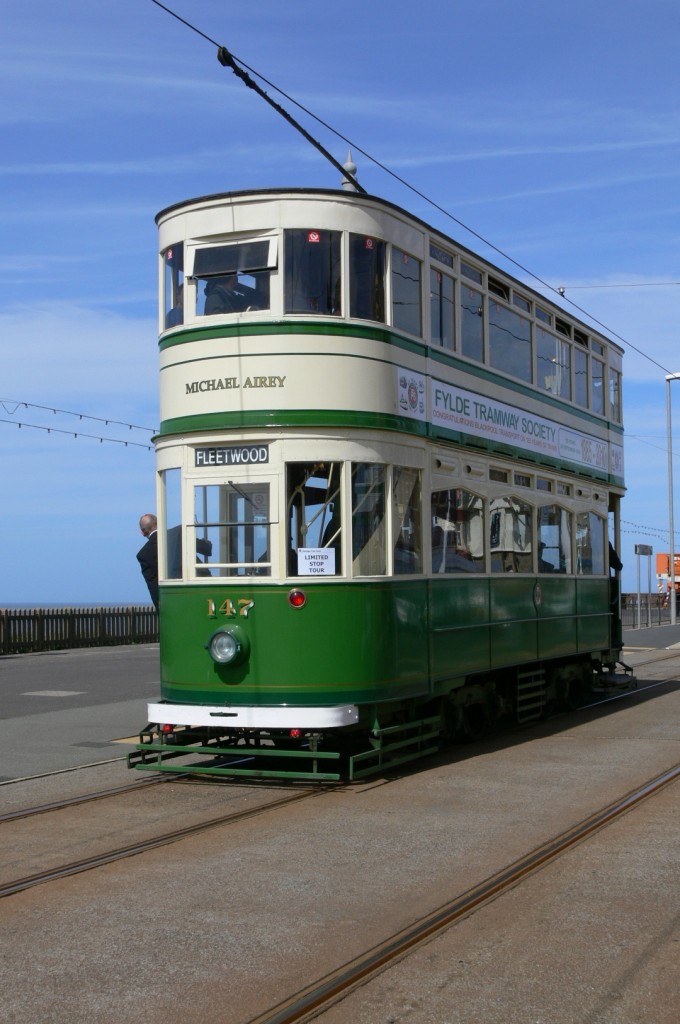 Standard 147 stands at Cabin on 4th May, a location which heritage trams such as this will be seen at more often now that it will be served twice a day when the blue service is in operation. (Photo by Andrew Waddington)

One Response to Heritage trams stretch their wheels even more!