Posted on Friday 21 November 2014 by Gareth Prior

It may seem like it was only five minutes since we were crowning Blackpool Boat 227, the Heaton Park Tramway and the Rejuvenation of the Blackpool Heritage Service with awards in the British Trams Online Tram of the Year 2013 contest but with December rapidly approaching it is time for us to once again turn our thoughts to just what deserves the accolade for the past 12 months. This year as well as the original “Tramcar of the Year” category we will also be looking for “Tramway of the Year”, “Event of the Year” and for the first time “Light Rail Vehicle of the Year”.

If you are new to the contest you are probably asking what on earth is “Tram of the Year”?! Well for the uninitiated we started the contest back in 2003 as a bit of fun at the end of the year to see just which tram enthusiasts thought had done the most special thing over the previous 12 months. That first contest saw Leeds 602 walk away with the accolade (interestingly one of only three trams to have won which has never operated in Blackpool!) with other notable recent winners including Liverpool 762 in 2010 (when the contest even made the pages of the Blackpool Gazette website!), Blackpool Marton VAMBAC 11 in 2011 and Blackpool Brush 623 in 2012 (the only tram to have ever won twice). In 2012 we added two extra categories with Tramway of the Year (Blackpool in 2012) and Event of the Year (2012’s winner being the Glasgow 50 event at Crich).

The nomination period is open from today until Saturday 29th November and you are invited to submit your nominations for all four categories by either commenting on this article, emailing us at gareth@britishtramsonline.co.uk or by leaving a comment on the announcement on Facebook (http://www.facebook.com/BritishTramsOnline). Once all nominations are in our “expert panel” will convene to decide on a shortlist which, for each category, will be between three and five nominees and voting should then commence on Sunday 30th November, lasting until early January. Further details on this will be revealed once voting has opened.

As a reminder we are looking for nominations for the following four categories:

* Tramcar of the Year – you can nominate any tram which you think has done something “special” over the past 12 months. It is up to you why you think it is special but it would be handy if you could say why you are nominating it (some will probably be more obvious than others!) As a word of warning saying you have nominated something because it is your favourite tram is not likely to persuade us to include it!

* Tramway of the Year – any tramway in the UK is eligible for this category whether that be an operating line or a museum line. Please give your reasons for the nomination to help us realise just what you have mentioned it! We aren’t necessarily looking for the tramway which has operated the best but this will be considered when deciding on the shortlist.

* Event of the Year – we are not only considering those specific events at museums but it can also include line and system openings. Last year we allowed the rejuvenation of the Blackpool Tramway, but please note that this time around it will need to be a specific Blackpool event for it to be considered (weekend or single day of operation).

* Light Rail Vehicle of the Year – a new category for 2014. The Tramcar of the Year category is always dominated by traditional trams and so with the past 12 months seeing an upsurge in interest in light rail systems we have introduced this category. We are looking for a LRV which has done something special over the past 12 months and again it is up to you what constitutes something special but when making the nomination please give reasons why you think it should be on the shortlist.

You can make as many nominations as you like over the next week or so (it doesn’t mean we will include all of them!) and remember the qualifying period is 1st December 2013 until 30th November 2014 (so there could be a late contender this week!). Details of all winners of the contest can be found on the dedicated Tram of the Year page (which still holds details of last years contest and will be updated ahead of the start of voting) at http://www.britishtramsonline.co.uk/tramofyear.html.

Don’t forget you can nominate by either commenting below, by email to gareth@britishtramsonline.co.uk or on our Facebook page at http://www.facebook.com/BritishTramsOnline and please remember it is just for fun! 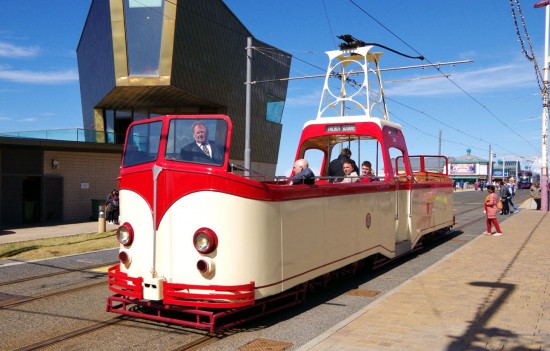 Winner of the Tramcar of the Year category in 2013 was Blackpool Boat 227 following its reactivation and repaint into this red and white what might have been livery. This photo shows the tram at North Pier on 23rd August 2014. (Photo: Ian Nightingale)

39 Responses to British Trams Online Tram of the Year 2014