1005 has become the latest T68 to leave Manchester Metrolink property and head for scrapping in Rotherham. The LRV departed at 0500 on Wednesday 25th June on the back on the familiar Allely’s low loader having spent the previous few weeks in the Trafford Depot workshops undergoing final component removal.

1005’s main claim to fame is that it was the first LRV to undertake a powered trip through Manchester City Centre in December 1991 and it was also the first of three T68s modified in 1999 to run on the Eccles line alongside the newer T68As. 1005 also had the honour of playing a starring role in an episode of children’s television programme Sooty & Co (just in case you thought we had gone mad with our headline!) in May 1993 for which it carried a special name for filming only (it was never carried in service).

1018 will be the next of the LRVs to leave for scrapping and 1003 has now moved into the Workshops waiting its turn to leave Trafford Depot.

On the M5000 front no further vehicles have entered service yet with the latest delivery – 3084 – still at Queens Road where it should be joined by 3085 this Saturday. 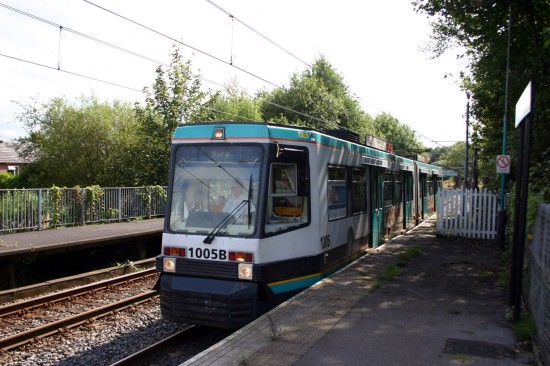 Tram stop - closed, LRV - sent for scrapping. A scene which can never be repeated as 1005 arrives at Woodlands Road on 7th September 2009. (Photo: Gareth Prior)