Posted on Sunday 17 November 2013 by Gareth Prior

The fourth Alstom Citadis tram – 219 – for Nottingham Express Transit arrived at its new home on Thursday 14th November having trodden the usual route from Spain via Southampton Docks. It arrived during the morning and was unloaded at Wilkinson Street Depot to join its three sisters already in situ, which have now received external numbers – although there aren’t exactly easy to spot!

As we reported earlier this week nighttime testing of 216 has commenced and it has now travelled over the complete line having made it through to Station Street with Radio Nottingham on board at 0300 as it created its own little bit of history. Testing is now expected to continue over the next few months ahead of an entry into service for the first Citadis sometime next spring.

The Citadis trams have now had external fleet numbers applied on their rear view cameras just behind the cab. Unfortunately these are in a fairly small font but follows in the steps of the recent new NET livery which has seen the Bombardier Incentro trams also only carry numbers in a similar position. It seems that tram operators in the UK don’t seem to want
people to easily identify their trams as both Edinburgh and Blackpool only carry their numbers on the side.

It hasn’t been all about the Citadis trams though this week as Incentro 209has entered service carrying a special Christmas livery. The livery is mainly white with light blue relief at the ends with blue snowflakes also featuring along with adverts for the pantomime in Nottingham this year. 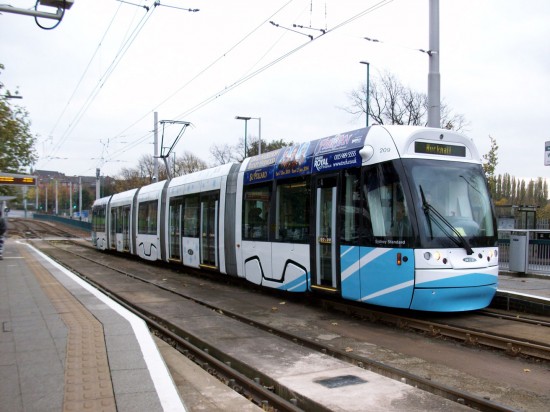 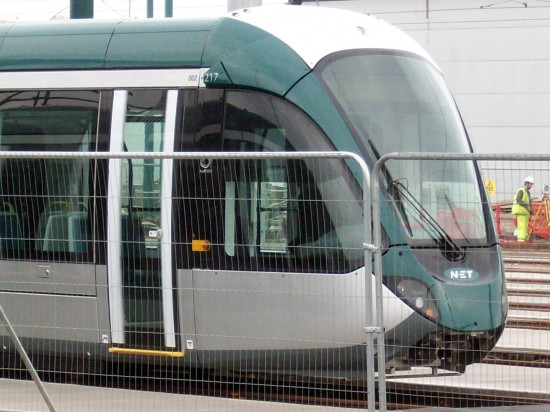 A close-up of 217 at Wilkinson Street Depot shows the positioning of the number. (Photo: David Beardsell) 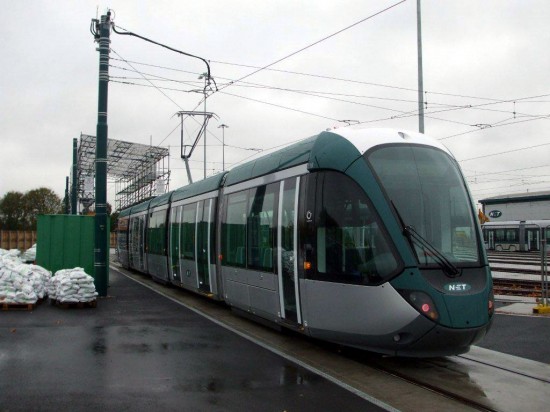 The third of the Citadis trams to arrive at Nottingham was 218 and this too is seen at Wilkinson Street. Note that it has also now received its fleet number and this view shows just how much trouble we will have in identifying these vehicles in the future. Let's hope there are plenty of advertising liveries! (Photo: Bob Gell)