In Pictures: Glasgow 585 at the Science Museum store

Whilst there are many Glasgow trams which have been preserved there is probably one which has proved to be elusive to most – Glasgow 585. Owned by the Science Museum the tram used to be on display at the Kensington based museum (until the late 1990s) but has more recently been kept in their off-site storage in Wiltshire. With no public access to the Wroughton store for some time the tram has remained out of sight but when volunteers from the Ipswich Transport Museum went to collect an Ipswich trolleybus which was being transferred east they couldn’t resist the chance to record the Standard car in photographic form.

Glasgow 585 was built in May 1901 as an open topper before receiving a short top cover (the condition that 22 operates in at Crich) and then in 1930 it was rebuilt to a fully enclosed tram. Withdrawn in October 1961, 585 was restored to its 1930s condition and received a repaint into the Blue route livery.

Purchased by a private individual the tram was originally due to head to the scheme at the Middleton Railway but, and probably fortunately, it never made the trip to Leeds when it became clear the project was not going to get off the ground. November 1962 then saw it leave Glasgow for the Science Museum with ownership having been transferred to that organsation.

It remained on display at the Science Museum until the late 1990s but a reorganisation of exhibits a that time saw the decision made to transfer 585 off-site and that is when it made the trip to Wroughton in Wiltshire for storage. Now over 20 years later and that is where the tram remains, in safe undercover storage but away from the public eye.

There are ambitious plans to develop the site at Wroughton – which is located at a former RAF airfield – to create a new, publicly accessible home for over 300,000 items from the Science Museum collection. To be known as the National Collections Centre the new facility should be open from 2024 with it being opened regularly for public tours, school and research visits. What part 585 may play in these though is unknown. 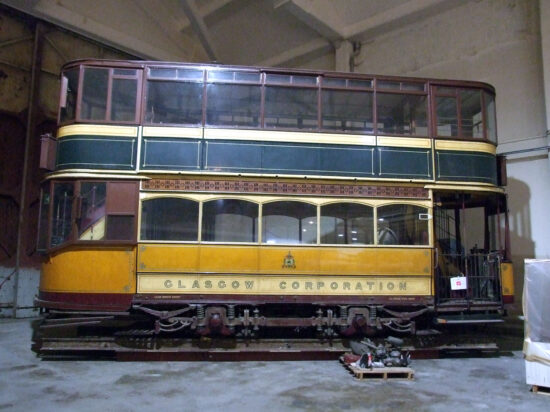 A side-on view of 585 at Wroughton showing the Blue route livery. 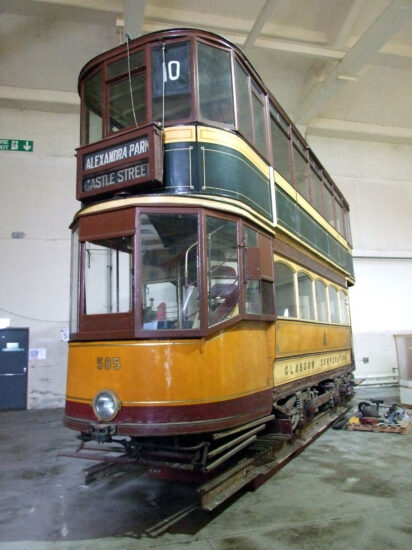 585 stands on a short section of track within hangar D3 at Wroughton. (Both Photographs by Stephen Cobb, 22nd April 2022)

8 Responses to In Pictures: Glasgow 585 at the Science Museum store