In Pictures: Metrolink 3138 delivered to Manchester

Posted on Tuesday 5 April 2022 by Gareth Prior

M5000 enters service to mean everything has run in service again and then the next one arrives seems to be a familiar pattern which has once again been repeated. Coming just a few days after 3137 entered service on the East Didsbury service than 3138 makes the journey from Germany. The one change to this story is that instead of arriving on a Saturday lunchtime it turned up on Sunday morning!

3138 had been seen on its journey on the Autobahn in Munich towards the end of the previous week but instead of arriving in Manchester on Saturday its travels were delayed and it wasn’t until shortly after 1000 on Sunday 3rd April that it would arrive at its new home.

As always it was delivered to Queens Road Depot with the tram in its basic livery without the spots added, although the fleet numbers are already firmly affixed.

After unloading it was moved into the workshops where commissioning will start ahead of mileage accumulation and an entry into service in due course.

There are not just a further nine of this batch of M5000s to be delivered. At the rate of every 3 weeks that suggests sometime in October for 3147 to be delivered to Manchester and with how quickly they are being commissioning we could see all of the new trams having entered service well before the end of the year. 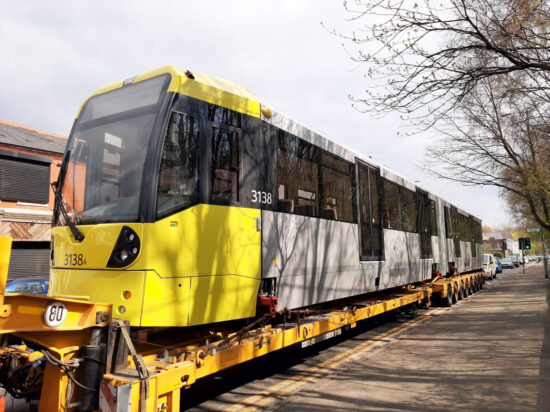 A bit of a traffic jam seems to be forming behind 3138 as it arrives in Manchester for the first time. 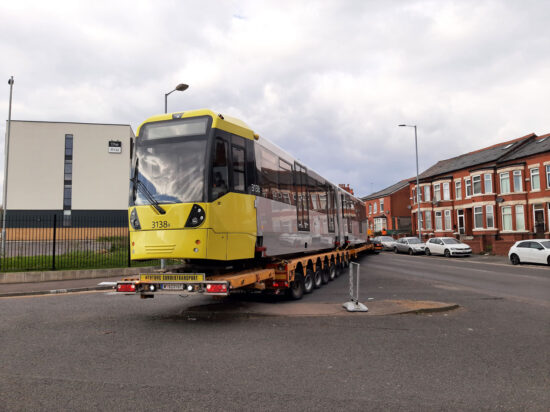 Round she goes as 3138 turns towards Queens Road Depot. (Both Photographs by Ben Worsley, 3rd April 2022)

1 Response to In Pictures: Metrolink 3138 delivered to Manchester