In Pictures: Points problems at MediaCityUK

Posted on Thursday 24 February 2022 by Gareth Prior

There have recently been problems for trams running between Eccles and Ashton-under-Lyne with them being unable to access the MediaCityUK spur owing to a fault with the points. This has meant services were running directly between Broadway and Harbour City and not serving MediaCityUK in that direction only – those running from Ashton to Eccles were still able to run onto the spur. This article shows the relatively rare sight of points having to be manually changed with Jim Smythe supplying the images.

The issue with the points was seen for several days during the week of 7th February but was fixed again a few days later to allow trams to once again serve MediaCityUK in both directions. MediaCityUK continues to only be served by the full Ashton to Eccles service with the pre-pandemic intermediate service terminated at MediaCityUK yet to have been returned to the timetables, although this week there are no trams at all due to engineering works on the line. 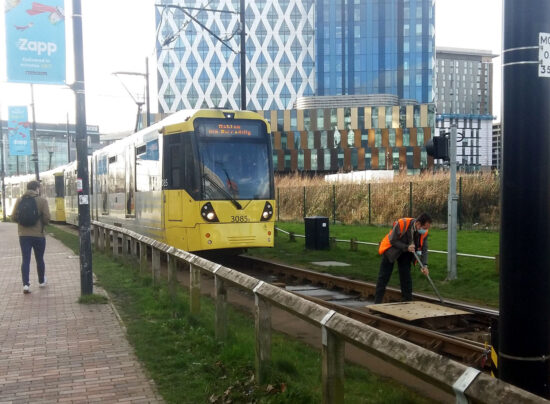 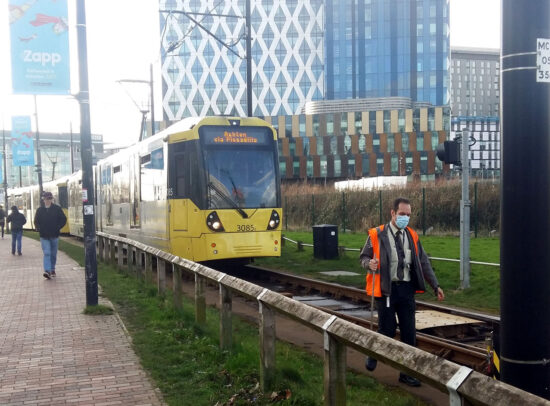 In these two views we see the driver of a service for Ashton led by 3085 (running as a double unit with an unidentified tram) attempting to change the points coming off the MediaCityUK spur. This service has been delayed by congestion coming off the branch and then needed to change the points manually before it could carry on its way. (Both Photographs by Jim Smythe, 9th February 2022)