Posted on Monday 26 October 2020 by Gareth Prior

The latter years of the Blackpool Tramway (pre-upgrade that is) saw a number of plain liveried trams in action and in 2007 that included the subject of our latest edition of “Picture in Time”.

Last time out we saw an overhauled Balloon Car which had gone flat fronted but after four trams received this rebuild it was back to a more traditional design once 713 went through the workshops although with several modern additions. When we see the tram in July 2007 it was running in a plain white livery as it was in-between two adverts – one for Asda (removed in May) and the other a very short-lived one for the Conservative Party during their conference in Blackpool during the September – but it had also carried this plain style immediately following its major rebuild. 713 is another tram which has had the “B” fleet amendments but sees more use on heritage tours than for its originally intended purpose.

In this photo we see 713 in Fleetwood as it approaches the end of its journey from Starr Gate. This shot is taken from the top deck of another Balloon Car but we can’t quite see enough of the livery to tell for definite what it is! 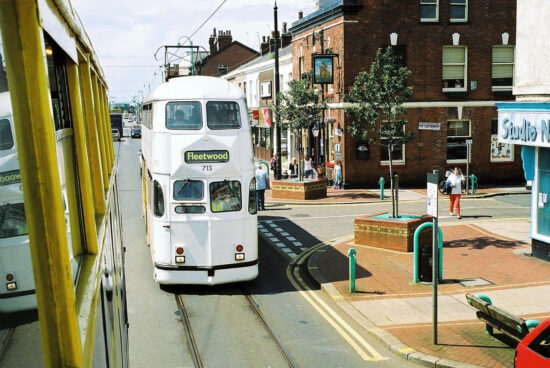