It’s back! Tram of the Year returns – nominations now open!

Posted on Sunday 24 November 2019 by Gareth Prior

Nominations are now open for each of the four usual categories:

* Tram (Traditional) of the Year

* Tram (Modern) of the Year

* Event of the Year

* Tramway of the Year

You can make as many nominations as you want for each category and this can be done by either commenting below, sending an email to gareth@britishtramsonline.co.uk or through Facebook. If nominating please give reasons for your nomination as although for most of your nominations it will be obvious some may be a bit more “left field”! Every year during the nomination process there is at least one tram, tramway or event I haven’t even considered so please take this chance to get your favourites onto the shortlist!

As usual we are looking for a tram/tramway/event which has done something special – or been special! – over the past 12 months and for the purposes of Tram of the Year the year goes from 1st December 2018 to 30th November 2019. It would probably be fair to say the year hasn’t gone completely as we would have expected and what you may have expected to be nominating you won’t be but there has still be plenty of action over the past year. It is entirely up to you as to what you consider special but to give you an idea previous tram winners have either returned to service after restoration/overhaul, received a new livery or gone on loan away from their usual tramway. Tramway wise its not the system or museum which has operated the best service which necessary walks away with the award but one which has seen something out of the norm happen (extensions opening etc.) And as for Event of the Year – its just an event which has been the most enjoyable!

If you want to know more about the Tram of the Year and to see all the previous winners – to help you get some ideas for what could be nominated this time around – please visit the dedicated page.

Don’t forget you can nominate one of three ways: 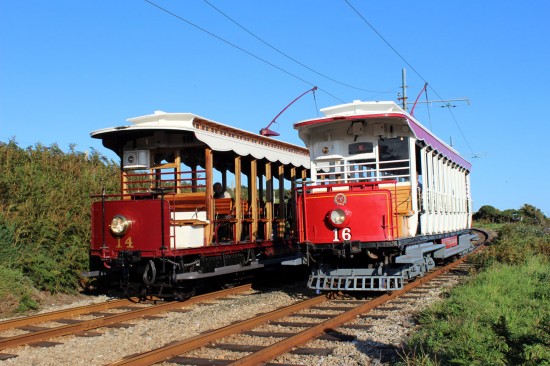 Any old excuse to show this tram again! The Manx Electric Railway’s stunning “Ratchet” car 14 was winner of the Tram (Traditional) of the Year in 2018 by a landslide and is seen here on 4th September 2018 alongside fellow Crossbench 16. (Photograph by Gareth Prior)

10 Responses to It’s back! Tram of the Year returns – nominations now open!