Posted on Saturday 15 June 2019 by Gareth Prior

The Tyne and Wear Metro is currently enjoying a high level of investment with existing infrastructure being upgraded, new trains on the way over the next few years whilst a £21 million project at South Shields will see a new terminus station for the network at an all new transport interchange. It has now been confirmed that this will open on Sunday 4th August but not before a four week closure of the line to South Shields to allow for works on the new station to be completed.

From Monday 8th July until Sunday 4th August there will be no trains between Chichester (the station just before the terminus) and South Shields. This will allow signalling and telecoms work to take place. During this period all services will terminate at Chichester with a replacement bus from there to South Shields.

Once the new South Shields station and interchange open the the existing South Shields Metro station on King Street will be closed permanently and demolished bringing an end to this structure which has been in place since the line opened in 1984.

Tobyn Hughes, Managing Director of Nexus, said: “The new £21m transport interchange is very close to completion and it’s going to be a really exciting development for South Shields town centre when it opens to the public in less than two months. This new interchange, which brings Metro and bus links under one roof, is a key part of the ongoing regeneration of South Shields town centre. It will deliver a bright, modern, and clean facility for public transport users. It is a step change in quality compared to what was there before. We have to close the line between South Shields and Chichester for four weeks so that some final signalling works can be carried so that our trains can stop at the new Metro station. I’m sorry for any inconvenience this will cause to our customers. The long term benefit will be a new transport interchange which we think will attract more people into the town for shopping and leisure.” 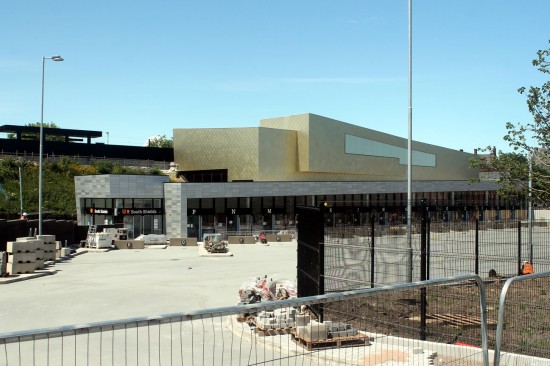 This view shows the interchange with the bus station in the foreground and the Metro station just visible on the top left of the shot. (Photograph by Trevor Hall, 10th June 2019)