Posted on Tuesday 2 October 2018 by Gareth Prior

We continue our look at the 1960s illuminated trams of Blackpool for this edition of Picture in Time with the always popular and instantly recognisable Rocket the focus this time around.

Based on the structure of Pantograph 168, the Rocket entered service during the 1961 illuminations – the second purpose built passenger carrying feature car to be constructed in Blackpool Corporation Transport’s very own workshops. Remaining in service until 1999, the Rocket was then withdrawn requiring a rewire which was never to be completed and after an aborted final tour in 2002 it became part of the Lancastrian Transport Trust collection. After a short spell on display in the middle of Gynn Square roundabout from 2012, 732 was moved to Rigby Road Depot where it remains to this day awaiting a chance to shine on the Prom once more.

This photo shows the Rocket just joining the Prom track from depot at some point in the 1970s (it carried these adverts between 1973 and 1980). With large crowds on the Prom is maybe switch-on night? 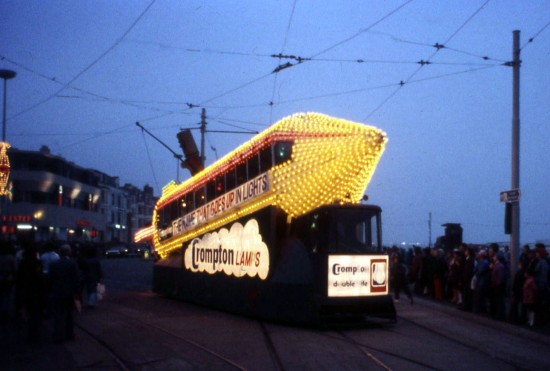