One of Blackpool’s best loved trams is undoubtedly the unique open-top Balloon car, ‘Princess Alice’ 706. The tram was always hugely popular whenever it appeared in service since its conversion to open-top condition in 1985, until the end of the 2015 season when it was withdrawn from use as it was in need of major workshop attention. The Fylde Tramway Society are now raising funds to enable this to be carried out, and donations from the public are needed to help!

706 currently requires a major body overhaul, as well as a new underframe to replace its 1934 original which was only partly renewed during its previous renovation in 1985. The work is expected to cost about £50,000 – with an initial £10,000 needed for the underframe alone. Obviously this is a hefty sum, although in the general context of tram restorations it represents very good value for money!

It is intended to have 706 back in service by 2021, which is the Fylde Tramway Society’s 50th anniversary year. As part of the sponsorship arrangement, the tram will appear with FTS adverts on its upper deck side panels, similar to those it carried back in 1985, with suitably amended lettering. The car will remain in 1985 condition with its extended roof canopy and single destination indicators at each end; it is generally felt that 706 is such an iconic tram that it should be preserved indefinitely in this guise, potentially leaving scope for another Balloon car to be returned to original open-top condition as a ‘Luxury Dreadnought’ with 1930s features such as twin destination screens and half-drop saloon windows.

Since ‘Princess Alice’ last carried passengers, many people have bemoaned its absence – but the fact of the matter is that a lot of time and money is needed to get the tram back into a condition suitable for its continued operation on heritage service. However, once the planned work is completed, 706 should be fit for many more years to come – so the appeal will secure the tram a bright future as a key member of Blackpool’s operational fleet.

To donate to this worthy cause, please send a cheque made payable to the Fylde Tramway Society to: Fylde Tramway Society, PO Box 1264, Blackpool, FY1 9EG, please clearly label your letter as being a donation for the 706 fund. Alternatively, you can contact FTS Committee member Mark Green by email: green.m@btopenworld.com to request further information.

As an added incentive, anyone who donates £100 or more towards the appeal will be rewarded with some special perks – a souvenir booklet detailing the history of car 706, a special ‘thank you’ certificate, a large photograph of the tram taken by acclaimed tramway photographer Gary Mitchell, and an invitation to see behind the scenes at the Rigby Road workshops to view progress on 706‘s overhaul. Please note that the FTS will deliver these perks by the end of 2018, except for the workshop tours which will be provided by Blackpool Heritage Tram Tours on dates to be confirmed.

The recent ongoing spell of hot sunny weather reminds us all of how much we miss having ‘Princess Alice’ 706 running on Blackpool’s promenade – now is the chance for all of us to help get it back where it belongs! 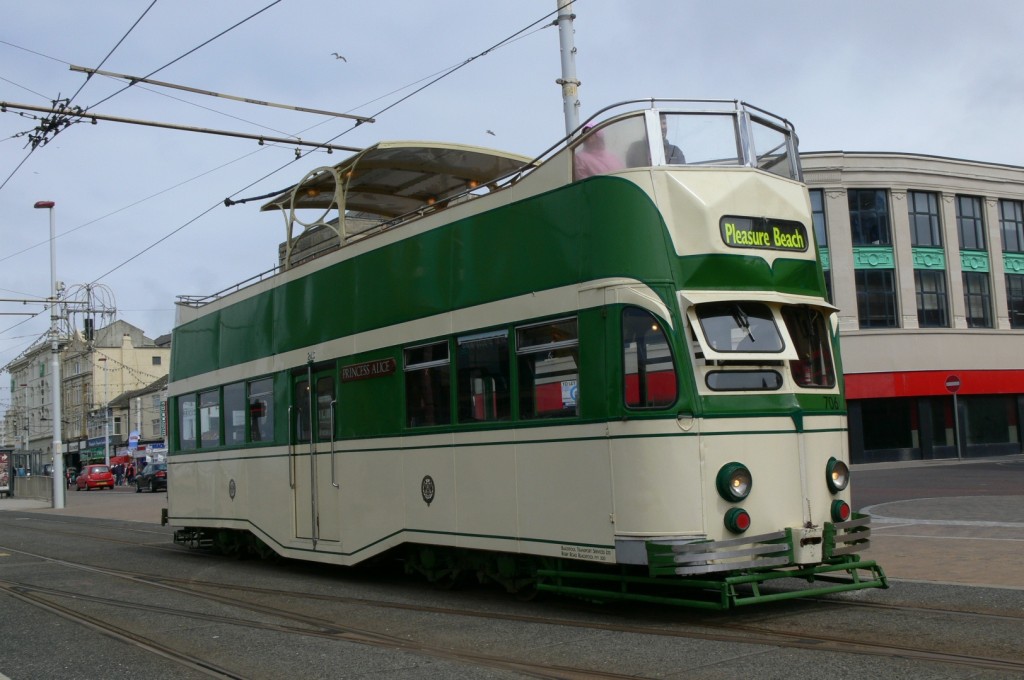 A classic view of 'Princess Alice' 706 in service at North Pier in May 2015. This was 706's last year of operation in Blackpool prior to its withdrawal to await a major overhaul, for which fundraising is now underway. (Photo by Andrew Waddington)