Over the weekend of 28th and 29th April five new contemporary sculptures were unveiled at the Crich Tramway Village. Created by artistic duo Musson+Retallick the sculptures – to be known as Conversations and Memories – are a permanent installation and are a legacy to the tramway men, woman and their families whose lives were lost or changed by the Great War.

The sculptures have been created using disused tramway track and are located on the Woodland Walk, between the outdoor play area and Wakebridge tram stop. The finished product has been made possible thanks to funding from the Heritage Lottery Fund, Arts Council England, Derbyshire Freemasons through Foundation Derbyshire and Derbyshire County Council’s Community Leadership scheme.

It would probably be fair to say that the finished product will not meet with everyone’s approval as they are very much in the category of modern art but they will tell a vital story in the history of the UK’s tramways, a story which until recently wasn’t much covered.

Tramways throughout the UK lost many men to the war effort which in turn saw significant social change with female tram workers being seen in positions of authority, a decade before emancipation.

Musson+Retallick used the museum’s archives and community engagement to inspire the final artwork, which is said to consist of abstract figures, standing in different locations around Crich. Each group of figures represent different story relating to material in the national collection.

Laura Smith, Fundraising Co-ordinator at Crich Tramway Village, commented: “The sculptures represent the heart-breaking and evocative stories of real individuals, such as Lilian, a Conductress on the Burton & Ashby Tramway who died doing her job, and Ernest, who was born in Crich, became a driver with Leeds City Tramway and survived the front line to return to a career on the tramways.” 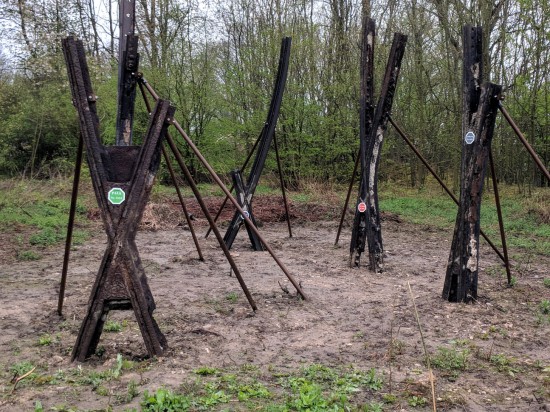 The sculptures in place. (Photograph by Ian Rigg, courtesy of Crich Tramway Village)