Blackpool Transport have revealed details of their winter tram service, with full timetables now available at www.blackpooltransport.com. This is a commendable move as sometimes in the past, timetables were not available until they had already been implemented; the illuminations are still shining and the revised service provision does not start until Monday 5th November.

After a few winters where no trams ran at all due to the ongoing upgrade works, any level of public service on the tramway would be welcome but in fact BTS are going with a very ambitious frequency which will provide the most regular winter tram service seen in Blackpool for many years. It is also pleasing that early and late service trams are also being retained.

There are four different timetables used on different days of the week, the most frequent being that in operation from Monday to Thursday inclusive. This offers a twelve minute service for the bulk of the day, with the first tram leaving Starr Gate at 5:00am. The service steps up to its peak from 8:00am until 6:00pm, and then gradually winds down to a basic half-hourly provision. The last tram of the day is scheduled to leave Starr Gate for Fleetwood Ferry at 11:15pm, and the last departure from Fleetwood is at 12:15am!

Fridays and Saturdays see a slightly finish, with the last tram from Fleetwood timed to set off at 12:45 – this is later than it has been during the summer! The first morning tram also starts one hour later on Saturdays, and two hour later on Sundays. A more basic twenty minute headway is provided on Sundays, once again reducing to half-hourly during the evening, and the last tram leaves Fleetwood at 12:15am, returning to Starr Gate for 1:10am.

BTS deserve praise for arranging such a high level of service during the traditionally quiet winter period, although the huge passenger numbers on the tramway so far this year suggests that many locals are using the trams as a means of getting around again, and this will hopefully prove succesful over the months ahead. To justify the £100 million investment in modernising the tramway it must prove its worth as a valuable transport system all year round and hopefully that is exactly what will happen during winter 2012/13. 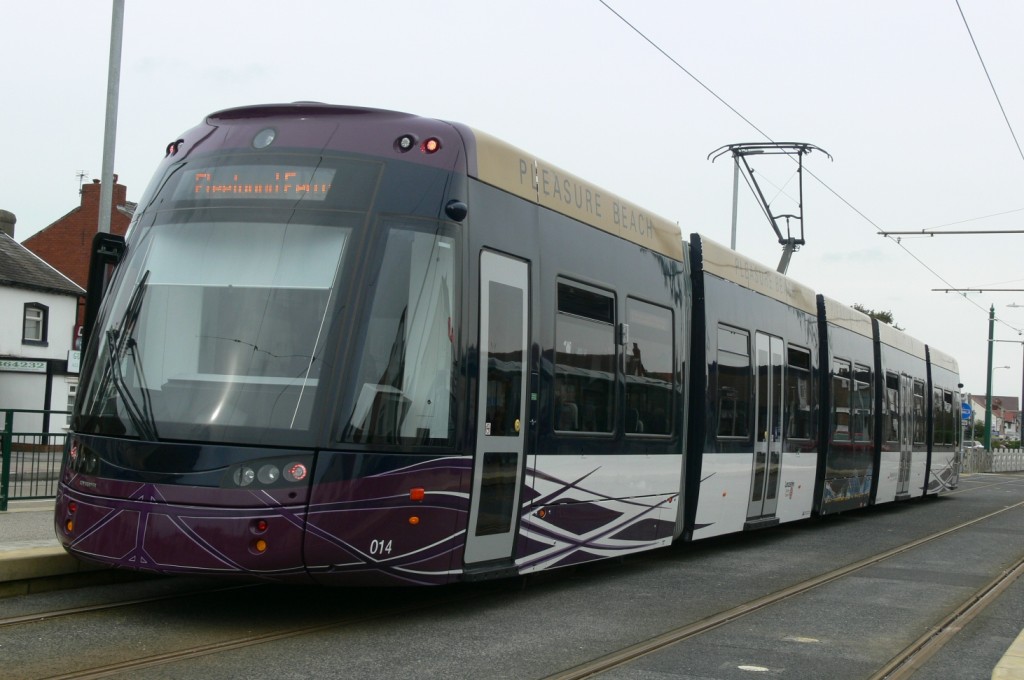 For the first time ever, the winter tram service will be worked by the new Bombardier Flexity 2 class. Here car 014 is seen at Cleveleys heading north earlier this year. (Photo by Andrew Waddington)