Are trams going to run in Preston again? The on-off saga of the Guild Line has taken another turn for the better with the news that Preston Trampower Ltd have appointed Eric Wright Civil Engineering to construct the line. A sod cutting ceremony took place on Tuesday 9th January at the same time as the signing of a memorandum of understanding between the two parties ahead of full construction of the demonstration line.

Preston Trampower still have ambitious plans for a full 3.5 mile route – to be known as the Guild Line – which would link the Deepdale area with the city centre and railway station but at the present time this is still a plan which has no approval as it has yet to be presented to the local council. But for now construction will start on the previously announced – and much delayed – demonstration line between Skeffington Road and Deepdale Street. This line will be 1,250 metres long and would also see a depot and station built. The service is likely to be operated by the Cityclass tram which has previously been seen in Birkenhead and Blackpool (with its infamous fire). Following the sod cutting ceremony work will get underway in earnest in March. The line will initially be for free demonstration rides and staff training with the service possibly welcoming its first fare paying passengers as early as 2019 – if plans are approved this year.

Professor Lewis Lesley, technical director for Preston Trampower Ltd, said: “To have such a prestigious local contractor on board is another huge vote of confidence in this project. We’ve all seen how the Manchester Metrolink has been instrumental in the growth of that city and I have no doubt that a Preston tram system can provide a huge shot in the arm for the city’s economy. We’ve put years of hard work and detailed research into this project. By utilising existing rail infrastructure, we can deliver this tramway with the minimum of disruption to residents and motorists. While only a small section of track is being built initially, we’re confident the full Guild Line can soon become a reality.”

Diane Bourne, managing director of Eric Wright Civil Engineering, commented: “Signing this memorandum of understanding is an important milestone and reassures the people who live and work in Preston that the new tramway is coming. As a local contractor with a strong heritage across Preston, we’re very proud to be leading the project. We’re looking forward to starting on site and delivering a quality scheme that meets local need and that the community can be proud of. City centre tramway projects are proven to bring numerous benefits and we’re aiming to replicate this same success within Preston.”

Preston Trampower Ltd are hoping to submit their full planning application later this year which would see a 3.5 mile line constructed. There would be 12 stops at key sites including at Deepdale Shopping Park, Preston North End’s Deepdale stadium and later the University of Central Lancashire. Six trams would provide the service which would be at a six minute frequency for much of the day. It is forecast that 1.8 million tram trips would be made annually.

Private investment has been lined up to both deliver the infrastructure for the tram service, as well as additional funds for the leasing of the trams, although no details have been given as to where these trams will be coming from. Much of the Guild Line would use existing railway infrastructure but there would also be some on-street running which would utilise the LR55 system. This track system glues into the road surface and apparently doesn’t require large scale excavation work which would help to bring costs down. According to the latest press release the project is said to cost £25 million which considering how much other tram systems in the UK have cost in recent years seems very optimistic.

As part of Preston Trampower’s plans they have also recently appointed former Managing Director of Blackpool Transport Trevor Roberts to assist on the delivery of its tram operations. Transport consultants Roger Bell and Peter Downs are also on the project team.

It is a project which has been met with delays at every turn and it seemed as though nothing would ever transpire but it does now seem that there is progress on the horizon and that in 2018 trams may run on a short line in Preston once again – the first time since 1935. 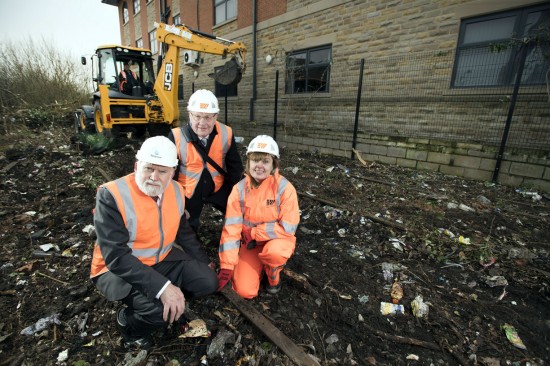 Lewis Lesley and Lincoln Shields from Preston Trampower are joined by Eric Wright Civil Engineering’s Diana Bourne at the Preston Muslim Girls High School for the sod-cutting ceremony. This sight is adjacent to the site of the planned tramway. (Photograph courtesy of Preston Trampower)