In this edition of Picture in Time we find ourselves in the capital for an image from the Docklands Light Railway of one of the original trains, 05 in 1994

Built by Linke-Hofmann-Busch in 1987 the 11 trains were delivered to the UK between August 1986 and February 1987 via Hamburg and Kings Lynn entering service at the start of services in 1987 when the network was much smaller than that we know today. Having given loyal service to the DLR they were withdrawn during the 1990s and were purchased for further use in Essen, Germany – entering service on mainland Europe between 1994 and 1998.

In this view we see 05 on 6th October 1994 approaching the original high level station at Island Gardens before the extension of the line under the Thames to Lewisham. This was originally a terminus of one of the North London Railway branches which spread out into the London Docks. 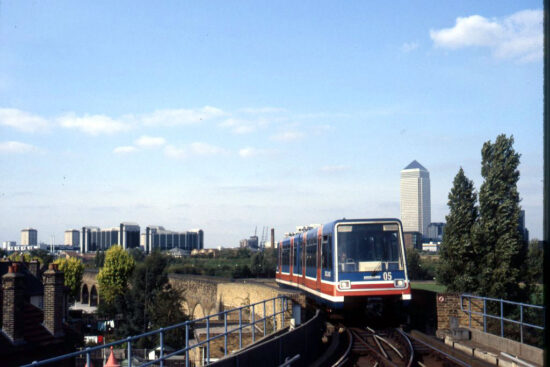