Posted on Friday 27 October 2017 by Gareth Prior

One tram which is rarely featured on these pages is Ipswich 33 which can appropriately be found at the Ipswich Transport Museum on static display. But we will remedy that today as we include a recent image of the tram in its usual home.

Built to the 3’6” gauge no. 33 was delivered to Suffolk in 1904 having been constructed at Brush in Loughborough. It remained in service until 1926 when Ipswich made the decision to replace their tramway with trolleybuses and was sold for further use. Like so many trams it ended up in use as a store shed in a garden in Claydon having been stripped of its truck, electrical equipment, stairs and the upper deck. It remained in situ for its new use for 50 years before it was rescued for restoration by the Ipswich Transport Museum in 1976.

Restoration took place of the tram to bring it back into a respectable condition and this included acquiring a suitable truck – and electrical equipment – from Lisbon in 1994 which enabled the tram to be placed on it for display. A full cosmetic restoration then followed between 2002 and 2012 which brought the tram to the stunning condition it can be found in today at the museum. The restoration was led by Mike Abbott – who also became involved the restoration of the Cambridge horse car also at the museum – who sadly passed away earlier this year. 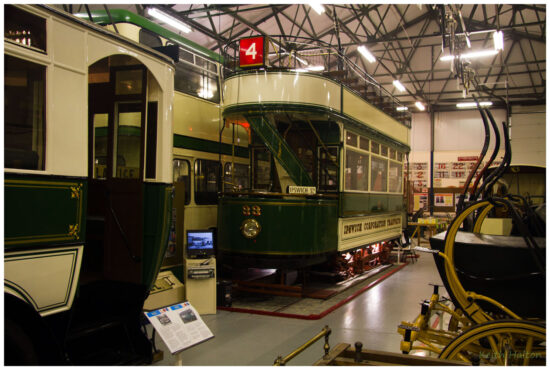 This photo shows 33 on its special section of display track at the Ipswich Transport Museum. (Photograph by Keith Halton)