In this edition of Picture in Time we are again visiting Eastbourne for an image taken on the Modern Electric Tramways line which used to run in the Sussex coastal town before the operation was moved along the coast to Seaton in Devon.

Recently in this series we have featured several images taken in Eastbourne including shots of the two similar double deck open toppers 6 and 7. This time we feature both of those trams again although in this instalment they are seen together allowing their similarities to be seen in more detail. Built just two years apart in 1956 and 1958 (with no. 6 using the chassis of a previous tram) by the time this photo was taken in July 1963 both trams looked very similar with no. 6 having received the enclosed small saloons at each end of the lower deck the year before. The pair are seen meeting at the Golf House stop as the two prepare to head in opposite directions on the line. Both would remain in service until the tramway was moved to Seaton with regauging for operation there following in 1974 (6) and 1976 (7). 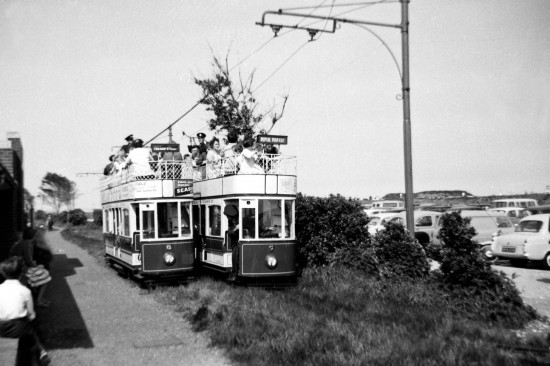