In Pictures: Blackpool 144 in the USA

Standard 144 was the very first Blackpool tram to be exported to the USA when it departed in 1955. Over the past 62 years the tram has remained at the Seashore Trolley Museum in Maine and although it has been a number of years since it ran in service 144 has recently seen a significant amount of work take place to bring it back to operational condition.

144 was withdrawn from use way back in October 1954 having given 29 years of service (it had entered service in June 1925). Following a period of storage in Blackpool it was acquired for preservation by the Seashore Trolley Museum in Maine and made the lengthy journey in March 1955 to its new home. The tram was used in service in the USA for many years in the 1950s and 1960s but was then taken out of use initially for wiring issues.

However after many years out of service attempts are now being made to resurrect 144 with assistance being offered by the Tramway Museum Society to bring the tram back to the rails. Recent work on 144 has included:

In addition to assistance from Crich, Peter Watts, in his role as US Liaison Officer for the Blackpool Heritage Trust, has entered into good communications with the team in Maine for the exchange of information and technical help.

The Seashore Trolley Museum is open between May and October (weekends only in early May and late October, daily otherwise) between 1000 and 1700, as well as the first two weekends of December. They have over 250 vehicles in their collection, mainly from across the United States. To find out more details of the Museum visit their website at https://trolleymuseum.org/. 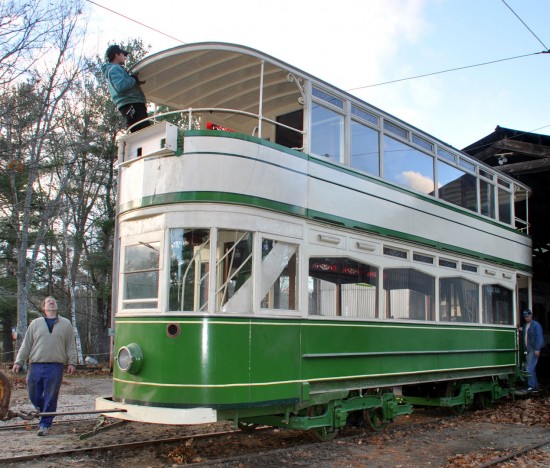 144 is hauled out of the shed showing the current external condition of the tram.

Another view of 144 in the open showing the open balconies and the green and cream livery. (Both Photographs courtesy of Seashore Trolley Museum)